Laibach – The Sound of Music 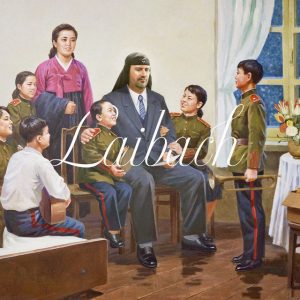 In 2015, the secretive authoritarian state of North Korea invited a western rock band to perform in their country for the first time. The band who received that dubious honour? Slovenian industrial provocateurs Laibach. It’s a true story that sounds like particularly dark satire.

For starters, Laibach aren’t exactly representative of what western rock music sounds like: with their heavy sound and guttural vocals they are very much a cult concern. Then there’s their controversial aesthetic and occasionally Wagnerian lyrics, which have seen them accused of being far-right totalitarians. It’s a subversive performance style rather than evidence of a genuine ideology, but in the context of a performance in North Korea it feels especially uncomfortable.

Laibach formed in 1980 and have an extensive back catalogue that they might have drawn on for their two concerts, but in what looks like a particularly bizarre twist in the tale the bulk of their North Korean setlist was made up of songs from the 1965 Rodgers and Hammerstein film The Sound Of Music. The result is therefore a totalitarian country hosting a performance by a band who have adopted a totalitarian iconography, who happen to be performing songs from a feel-good musical that happens to be set during a totalitarian regime.

Thankfully, there are sensible explanations for all of this. The Sound Of Music is a familiar film in North Korea, and is used as a means of teaching English in schools. Laibach are exactly the kind of band who might actually agree to perform in North Korea – almost any other successful act would surely balk at the likely reputational damage. And the whole spectacle is more than simply a pair of concerts: it’s a wider project engineered and promoted by Norwegian film-maker Morten Traavik, who also made a documentary about the experience, Liberation Day. So perhaps on one level it was indeed a piece of satire.

The other document resulting from this project is Laibach’s new album, which consists of nine songs from The Sound Of Music, plus two traditional Korean pieces and a speech purportedly welcoming Laibach to North Korea. This isn’t Laibach’s first covers album – their discography includes re-workings of the Beatles album Let It Be and Bach’s Die Kunst der Fuge – but it is perhaps their most unlikely.

Nevertheless, it’s more successful than might be expected, and the pieces from The Sound Of Music actually retain a kind of innocence. The opening lines of the titular song are delivered in a conventional, even beautiful, singing voice – the trademark growl of Milan Fras doesn’t come in until a bit later – and for a minute or so the listener is made to wonder if Laibach aren’t playing it a bit safe. In fact, the covers carefully negotiate the crossing points between clean and snarled vocals, and between lush orchestrations and dark synths.

Divorced from the context of the North Korea shows the purpose of these songs seems a little unclear, even factoring in the wordplay of “How do you solve a problem like Korea”, so the final few tracks are crucial to the album. Korean folk song Arirang is played straight and sincere, backed by simple piano; and in The Sound Of Gayageum Laibach play around with a traditional Korean stringed instrument and add ’80s movie montage flourishes. The closing Welcome Speech is an unabashed critique of Laibach, with passages such as, “This band basically jokes and laughs about what they call dictatorships around the world – and their music is terrible.”

Slovenian philosopher Slavoj Žižek has said that Laibach’s means of subversion is to “take the system more seriously than it takes itself”. How far they take themselves seriously has long been a mystery, however, and in The Sound Of Music that remains very much the case.