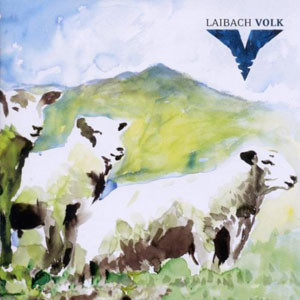 On first listening to the grand political statement that is Volk I was convinced Laibach don’t like my city. I’m a Londoner, a resident of the metropolis that sent the English language out across the globe, that ruled a quarter of it for a while, that replaced fading military supremecy with growing cultural and lingual hegemony, aided and abetted by what became the United States and other assorted former colonies.

Why? Well, it all stemmed from the track Anglia, Laibach’s reworking of God Save The Queen, that suggested an irritation at so much of the world speaking at least some form of English, be it pidgin or fluent mother tongue. Glancing through the record’s sleevenotes, we are assaulted by the words of Condoleeza Rice: “It is best for the World if the USA continues to enforce its own interests, because American values are universal values.” We are barraged by the words of British government documents circa the post-war disintegration of the Empire, and by various advocates of a unitary European and artistic language of expression – all of it dredged from the free-for-all depths of Wikipedia.

On closer examination, Volk – literally “people as a nation” – transpires to be about people and nations more generally; an examination of what patriotism and cultural identity is, even. “How blind can you get for your country, right or wrong?” they ask on America. Volk reworks national anthems, seemingly in order to present countries as Laibach would have us see them. A vocalist straight from the bowels of the Earth aurally illustrates the band’s concerns. Anglia splices God Save The Queen into a series of questions asking us if we in England still feel superior to every other nation. At the very least it’s a startling stance and one that deserves engaged examination.

There are 14 anthems, each for a nation of Empire – including China, Japan and a particularly haunting effort for Russia. Lyrics in English provide potted histories of the nation-states’ assorted colonial follies, while Laibach’s dark electro-rock arrangements work as a common thread tying the imperial world together as one.

Collaborating with compatriot electroheads Silence and a selection of guest vocalists who generally sing in their own language, Laibach have dared here to give music a purpose beyond boy-meets-girl pop. This is music as conceptual and relevant art.

In amongst the clever politics of nationhood and the arch stance of the band is a sonically interesting record that mixes in emotive orchestral string sections with industrial electro bass and vocals ranging from accented goth rock to folk. Yet for all the detail, Volk is first and foremost politics as music.

By the end of the record the sting is in the tail. NSK (Neue Slowenische Kunst – New Slovenian Art) is Laibach’s own state, complete with its own anthem, website, pomp and nationalistic flummery. The political statement writ large through Volk by the end comes complete circle. It is this political vision that marks out the record rather than the music itself – not for Laibach an interpretive collection of national anthems, but rather a statement about how humankind lives now and in the future. It’s ambitious, certainly – but they get away with it.