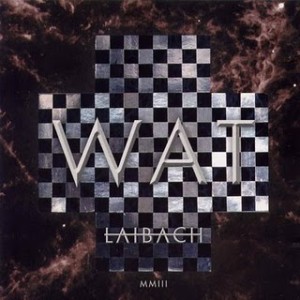 I’m not sure I’ve heard a Slovenian band before, let alone one credited with co-founding an art collective that was declared a virtual State in Time, issuing its own passports and staging embassy and consulate events in many countries. You get the picture – we’re talking heavy politics here, which is possibly why Laibach were banned in their home town before their first live performance.

“We are no ordinary type of group / we are no humble pop musicians / we don’t seduce with melodies and we’re not here to please you…” – the opening lines of closing track Anti-Semitism. They’re not kidding, folks. Think of a voice harsher (though more tuneful) than Tom Waits. Think of the shock the first time you heard Diamanda Galas. Think Nine Inch Nails with attitude, German industrial rockers Rammstein, Ministry.

Then add genuine artistry plus shades of Stravinsky at his rowdiest and the result is a highly intriguing album. A mixture of German and English lyrics – more growled and snarled than sung – and pure industrial rock is overlaid with assured orchestration and wild choral highlights, at times turning WAT into a Wagnerian horror epic. If ever there was music to accompany Hieronymous Bosch’s nightmare visions, this is it. Spiky, full of unexpected disjunctions, uncomfortable, compelling.

Opening (and standout) track B Mashina gets you into the mood relatively gently – the voice almost normal, recognisable guitar backing, English lyrics – though the words are ominous enough. “Only one day is left / only one day… Let the sun fall into the ocean / let the earth erupt in flame / it is enough to have the strength and knowledge to raise our dream machines into the sky / Let them sleep who do not know that the final day is here / the very last / and we leave at dawn.” The tension grows as the male choir kicks in, and reaches a breathtaking climax with the full chorus.

Tanz Mit Laibach – the first single from the album – takes us into serious headbanging territory and as its name suggests, is the closest this band probably comes to a pure dance track, though Achtung! would probably also do well late at night.

Ende introduces the breath as instrument, combining it with sinister orchestration to eerie effect, while Hell:Symmetry pairs pure rhythm backing, minimal electronica and heavy breathing with some transfixing lyrics. “Love me, love me not / Love me, love me not / I will take your anger and I’ll make it mine / I will demonise it and it will multiply…”

“Barbarians are coming / crawling from the East” spits the lyric of Now You Will Pay – “The nation of losers / the tribe full of hate / with knives in their pockets and bombs in their hands / they’ll burn down your cities and your Disneylands…” Another standout track, with unexpected piano trills, choruses worthy of Philip Glass at his most exciting, and thoroughly unsettling lyrics.

Actually the whole album is unsettling, and yet it has to be listened to. The title track is a microcosm of the whole – a relentless catalogue of modern horrors set against a crashing backdrop. Black as pitch, but with blessed intervals of beauty offering a tiny ray of light.