Lake Street Dive – Free Yourself Up

by Steven Loftin
published: 4 May 2018 in Album Reviews
Tweet 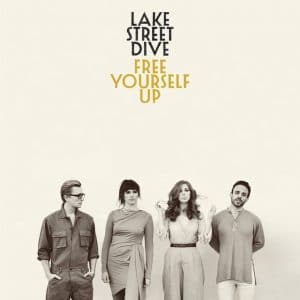 There’s a hell of a lot to unpack on this outing from Lake Street Dive. For a band that is considered “multi-genre” there’s an awful lot of recycling, repurposing – and some questionable choices in evidence.

This is quite surprising, given they’re on their fourth full length. They are mostly synonymous with swinging soulful numbers that bask in the glory found towards the louder end of the vocal spectrum. In your face from the get-go, they are adept at letting the dynamics of their sound keep you on your toes.

There’s an emotional energy to Baby Don’t Leave Me Alone With My Thoughts, with smooth, soulful jazz hints glowing through. For a moment the future actually seems quite bright – somewhat ironically, given the subject matter of the track. Things then take somewhat of a left swerve with Good Kisser, which starts off gently before swiftly roaring into life.

Moments like these are simultaneously the heartbeat of Lake Street Dive, and yet also somewhat of a hindrance. They can be overwhelming, to the point where they become a distraction. This modus operandi, led mostly by singer Rachel Price’s powerhouse vocals, is the one consistency across the album – which, given they’ve been labelled “multi-genre”, is no bad thing, but it does ultimately contribute to the album’s unwinding.

Dude, with its chorus of “Would you love me more, if I was a dude, would you think I’m cool?” sounds weak, and the verses fare little better. The premise of thinking your other half is more interested in his pals might be a valid one but the delivery here feels as unstable as the relationship in question.

The bumpy road ahead continues with reggae flavours slipping through on Red Light Kisses, and even slight hints of R’n’B coming through on Must’ve Been Something. They’re all pleasing, and on the surface fit nicely, but are suggestive of an album constructed out of individual tracks, rather than being assembled as one whole.

It must be said that musically the band’s sense of soul comes screaming through, be it through an out of control horn phrase, or a studious rhythm section. There’s no denying the sheer talent of this group of musicians. Even if the songs are a ragtag bunch, the portrayers are not.

At times it feels like an album with no real purpose other than to be heard and then forgotten. Few tracks jump out as being memorable. A more driven focus upon one element of their sound could have led to a far greater album, or could have at least tested the waters in terms of what they might achieve further down the line.