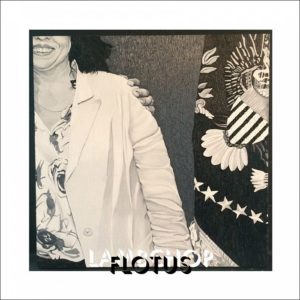 The first song from Lambchop’s new album to be made public was eighteen-minute long closing track The Hustle, inspired by a wedding attended by the band’s lynchpin Kurt Wagner. It marks a change in direction for Lambchop, with intricate Four Tet like electronics brought to the fore, and presents itself as if in a series of movements. First, there’s a five-minute ambient instrumental, then Wagner’s vocals come in, singing super-romantic lyrics about enduring love and cloud formations. The third movements reverts to an instrumental, dripping with woodwind, and then the final stanzas of lyrics come as a kind of coda.

The format of this remarkable song might have suggested that FLOTUS would have only four or five tracks, but no, there are eleven songs here, and the album is bookended by lengthy ones. Twelve-minute opener In Care Of 8675309 sounds more like a typical Lambchop song then anything else here; like an old folk song it just keeps rolling for the duration with Wagner piling verse upon verse to make his point. The only nod towards the rest of the record’s electronic and hip-hop influences is the heavy use of vocal processing.

By track two, Directions to the Can, the contemporary hip-hop influences that Wagner has cited become clear: this could be Wagner scatting over a Frank Ocean or Kendrick Lamar production. The lyrics are fragmentary and unstructured, recited over pulsing beats and minimalist piano. These elements, plus loping basslines, are the hallmarks that recur throughout the album. Apparently, the album was written using a vocal processor and drum machine, so the more organic elements were presumably overlaid further on in the process, and these and the snippets of lyrics add warmth to what might otherwise be a rather cold production.

There is a moment a few tracks in when the songs start to blur together a bit: without particular vocal or musical hooks some feel rather formless. But there are others that stand out. Relatives #2 more around a lot more than most of the songs here, introducing and layering new elements. There seem to be several different voices in dialogue, but all of them are Wagner’s, and there is lovely, languorous interlude in which the beat drops out and we’re left to enjoy the textures of the song. New single NIV is another highlight with its bubbling piano and pinprick synths; latter day Radiohead is surely a reference point here.

FLOTUS is most successful when it marries the influences from hip-hop productions with the pop-rock template that has essentially underpinned most of Lambchop’s previous work. This is significant in that suggests a way for alternative rock music, which is always at risk of becoming hackneyed, to embrace the forward thinking techniques of electronic and hip-hop producers. Of course, there are plenty of bands who are drawing on influences from electronic and dance music, but few manage meetings of styles that don’t compromise either. At it’s best, this album does.

FLOTUS, by the way, doesn’t stand for First Lady Of The United States – it’s For Love Often Turns Us Still. That’s a nice sentiment, but surely there is at least a semi-political subtext here, especially when the album is to be released a few days before what must be the most memorable US election in living memory. The album also includes a song called JFK – who knows what that stands for in this context. If there are hidden messages here then they remain enigmas, lost in the fragments of processed vocal that slip in and out of the songs. FLOTUS might be an experiment, but if it turns out to be the template for Lambchop’s future output then that would be no bad thing.