Lambchop – This (Is What I Wanted To Tell You) 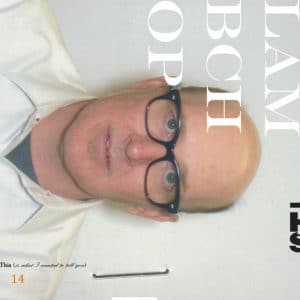 FLOTUS, Lambchop’s 12th album released back in 2016, represented something of a cut off point from their past. It revealed an unexpectedly different set of musical principles featuring processed vocals from frontman Kurt Wagner. Follow up release This (Is What I Wanted To Tell You) acts as both a continuation and deepening of this sound.

Its origins can be traced back to the summer of 2017 during which Wagner struck up a friendship with Hiss Golden Messenger and Bon Iver drummer Matt McCaughlan which developed into them remotely exchanging musical ideas. They convened in Nashville and recruited long-term Lambchop personnel pianist Tony Crow and bassist Matt Swanson and the results were accordingly captured.

The eight tracks on the album make for a compact, languid and soothing listen. Opening track The New Isn’t So You Anymore is lean and focused, Wagner’s clipped, Auto-Tuned vocals sounding as though they are carrying a low electrical voltage. It still might be hard to fully embrace the treated vocals but on the whole they work better here and totally fit in with the broader musical context. It also features some uplifting, free-wheeling harmonica from Charlie McCoy.

The fluid consistency of tone runs right through the album, each track seamlessly blended into the next. Crosswords, Or What This Says About You is typically delicate and studied and ends with a beautiful piano outro while Everything For You opens with a flourish of electronic percussion. Moments like these offer pleasing mini-highlights that reside in the memory.

Advance teaser The December-ish You sounds even more sumptuous in the context of the full album. The various musical elements make ripples as they are dropped into a midnight-blue lake and Wagner sings of “Friday night fever, the upside-down crown”, his abstract poetry perfectly complimenting the beautifully textured sounds. The title track features an even more finely cut aesthetic, effervescing micro-percussion straying into pleasingly esoteric territory. It’s not impossible to hear late period Talk Talk in the distanced brass and intriguing wider landscape, suitably high praise for an album of real depth.

Closing track Flower is the closest the album gets to the Lambchop of old, Wagner’s vocals liberated from the Auto Tune as he emotively pleads “give me back my Christian name” set to a simple backdrop of acoustic guitar and harmonica. This (Is What I Wanted To Tell You) is a fascinating piece of work that further renews and reinvigorates the Lambchop catalogue. During The Air Is Heavy And I Should Be Listening To You Wagner sings “this is the new not normal” and it sums up the album well. They’re looking forward, stepping outside of their comfort zone and creating some of the most interesting, ambitious music of their long career.