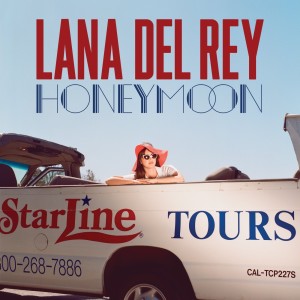 Lana Del Rey has managed to carve out a nice little niche for herself ever since her debut single Video Games propelled her into the spotlight. After failing to find success as Lizzy Grant, the 30-year-old reinvented herself as the self-proclaimed “gangsta Nancy Sinatra”. While that particular description may be somewhat overblown, there is a grand, cinematic quality to Del Rey’s sound that really marks her out from the rest of the pop chart.

Her major-label debut, 2012‘s Born To Die, demonstrated that Video Games was by no means a one-off, with her unique mix of influences producing an enchanting and largely memorable collection of pop songs. It was followed two years later by Ultraviolence, which saw Del Rey expand on her sound with the production work of The Black Keys’ Dan Auerbach and took her highly-stylised persona to a new level.

It is this emphasis on her image – something that has been hard to ignore since she first burst onto the scene – that saw some turn against Del Rey. However, while there is undoubtedly something very artificial to everything that she does, it is impossible to ignore that there is no one else currently in the industry who comes close to matching her fatalistic melancholy. And very little has changed on her latest major label effort, Honeymoon.

Produced by Del Rey herself – with the assistance of long time collaborator Rick Nowels – Honeymoon contains all the usual lyrical themes that have dominated her first two records. It is also as broody and cinematic as ever. Yet, why change what has already proved to be a winning formula? What’s more, it may very well be her most fully realised and complete record to date. It is certainly her most personal effort.

In that sense, therefore, Honeymoon does live up to her suggestion that it is “very different” from her first couple of albums. The sweeping strings that introduce the opening title track are trademark Del Rey, but when her recognisable sultry vocals begin there is a fragility that has previously felt forced, as she croons: “We both know that it’s not fashionable to love me/ but you don’t go cause truly there’s nobody for you but me.”

The almost creepy Music To Watch Boys To is an early highlight, with its almost desperate lyrics (“I like you a lot/ putting on my music while I’m watching the boys”) perfectly complemented by the song’s hushed melody, which sweeps dramatically over the chorus. Then there is the mesmerising God Knows I Tried, which sounds like a readymade Bond tune at times – something that could be applied to several tracks on Honeymoon.

There are some bumps along the way, though, with Art Deco and Religion sounding almost too lackadaisical for their own good. This impression could be partly due to their position towards the back end the album, when it has to be said that Del Rey’s repetitive monotone vocal can begin to get tiresome. Salvatore is another that falls flat, while you may just want to curl up in a ball and sob uncontrollably by the time The Blackest Day comes around.

That said, when she gets the formula right, the results speak for themselves. High By The Beach is a throwback to the hip hop beats of Born To Die, injecting some much-needed pace into proceedings. Freak is another example of Del Rey working with a more playful melody and – as demonstrated by the Summertime Sadness remix – when she does venture into more straightforward pop it rarely disappoints.

Having taken us through a whirlwind of emotions already, Honeymoon closes with a cover of Nina Simone’s Don’t Let Me Be Misunderstood, which sends out a pretty clear message. Pages and pages have been written about Del Rey and her “image”, but her latest effort finally gives us an insight into the woman behind the persona. It’s for this very reason that Honeymoon is her most accomplished record to date.