by Jon Clark
published: 7 May 2012 in Album Reviews
Tweet 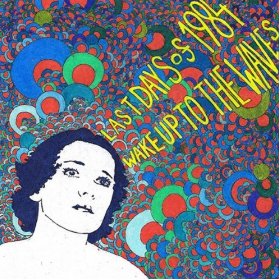 Delightful, dream like nostalgia permeates Wake Up To The Waves, Dublin duo Last Days Of 1984’s debut album. Employing similar methods to their more guitar-led counterparts such as Fixers, and much more effectively, the two-piece have created a lush, shimmering heat mirage of an album, wistful and relaxed whilst interesting and inventive.

Mainly combining electronica, chill out and occasional Brian Wilson-style vocals, the record is one deeply rooted in the electronic past; not only bringing to mind the aforementioned artists but also a bygone age of underdeveloped video gaming, ’80s teen movies and cassettes. An engaging effort from start to finish, the record also is genuinely unpredictable and original, with unexpected and eclectic influences (see Wave Life’s Indian motif) cropping up, peppering the record with unusual twists and turns.

The album can be split in two in terms of musicality. One half, including tracks such as River’s Edge, Safari and Wave Life, features more prominent vocals and recalls artists as diverse as Animal Collective, The Beach Boys, The Cocteau Twins and Fleet Foxes. It’s all sweet melody and harmony, melding folk and surf rock with synth pop; creating a hazy and relaxed atmosphere that on occasion is broken by a burst of well-used drum machine and synthesiser. Nowhere is this more evident than on the excellent closer Woods. The initial, pulsing beat gives way to a tropical, dream like vocal that is in turn punctuated by a cold, industrial synth line bringing the listener from the Seychelles to Sheffield with remarkable and seamless ease. Elsewhere Safari recalls Girls’ debut album, reverb soaked acoustic guitars and hand drums back a vocal performance reminiscent of the girl groups made famous by Phil Spector; a stoned, lazy homage to an idealised summer, one in which the sun never went in and September never arrived.

The other songs on the record are pulsing, ’90s electonica; another style that the duo seem to have nailed. The songs, such as Kismat, Francois Truffaut/Event Technologique and Season, throb with Underworld-esque beats that create a vivid feeling of sultry nightlife and hedonism, doing so with excellent results. Intense, irresistible and confident, these tracks evoke the feelings of optimism and excitement that good dance music should. Kismat is truly a marvel; creating a particularly vivid and nostalgic warmth whilst managing to remain mystifying and intense. Meanwhile the excellently titled Francçois Truffaut/Event Technologique has a wonderfully tacky, ’80s-cop-drama-set-in-the-dystopian-future feeling to it; you can almost envisage the dubious performances.

Overall, the album is excellent; a truly inventive and innovative record for a debut. Generally, albums that play with such a wide range of influences, structures and dynamics run the risk of being unfocused and messy, but this is by no means the case with Wake Up To The Waves; it gels all these aspects together to create a concentrated and succinct collection and is as compelling at its beginning as at its end, with no deviation in between. The Last Days Of 1984 have created a thoroughly intelligent record here, one that deserves to be listened to and used to soundtrack the summer. Unflinchingly and refreshingly good.