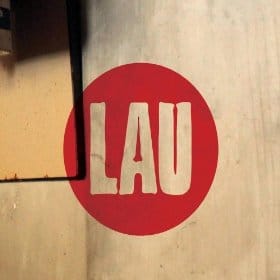 Lau have received numerous accolades since 2009’s critically acclaimed Arc Light. As well as their three consecutive Best Band titles at the BBC Radio 2 Folk Awards (2008-2010), their live shows brimming with improvisation have left audiences mesmerised. They have also collaborated with Adem Ilhan on the well-received Ghosts EP and even written an orchestral piece with world-class composer Brian Irvine, known for collaborating with artists ranging from poet Seamus Heaney and Japanese experimentalist Keiji Haino to Duke Special and Snow Patrol .

With all these successes and collaborations in mind, the expectations for Lau’s third album were extremely – perhaps unnervingly – high. Yet the trio continue to move folk music into new territories with apparent ease: their collaborations with the genre-crossing Adem and Irvine have seemingly filtered through, with support from Sufjan Stevens and Decemberists producer Tucker Martin. Indeed, according to Lau’s Martin Green, Tucker understood the band’s desire to mix the traditions of folk with his desire for electronica. This shows.

Like Arc Light, each track on Race The Loser is built on layer-upon-layer of sounds and subtleties, often revealing something new and unexpected with every listen. However, while Arc Light showed Aidan O’Rourke’s driving fiddle playing, Green’s accordion and Kris Drever’s guitar and vocals intricately merging and flowing into another, creating surprising switches in melody and tempo, Race The Loser embraces electronica to add a whole new layer and depth to Lau’s sound.

The intro to the album’s opener, Saint Monday, is made up of a thudding heartbeat, with discordant samples of O’Rourke’s fiddle drifting in and out, creating something rather ominous. Amid all this are small rumbles of synth filtering through the accordion and fiddle, before Drever’s vocal rises above the somewhat gloomy myriad. This is post-rock-electronica-modern-folk – or post-folk, perhaps – with moments not out of place on the new Godspeed You! Black Emperor.

The opener is followed by the eight-minute instrumental Far From Portland, which instantly jolts you from the overcast into something far livelier, blending Celtic rhythms with twinkling keyboard and skipping record player-sounding samples. However, what starts out as lively eventually becomes aggressive and – again – post-rockesque.

Meanwhile, the 38-second Missing Pieces sounds like a cross between those tunes synonymous with Cold War numbers stations and Blur’s Optigan 1: a strangely beautiful tidbit that is unlike anything folk music-wise. And, when sat alongside proceeding track Save The Bees – a track that would nestle well on Arc Light and shifts from sobriety to optimism and back in a flicker – it sets another up not only another surprising contrast, but raises the question of what is, or what could be, folk music.

The album’s stand-out track is the seven-minute Torsa, presenting folk and electronica in perfect situ: the simplicity of gradually building synth, keyboards and bass lines underpin O’Rourke’s supreme musicianship, producing something epic and memorable indeed: a folk equivalent of The Big Ship by Brian Eno.

With Race The Loser, Lau (who take their name from the Orcadian word for natural light) continue to shine, with their reputation as folk’s bastions of innovation extended. Yet the album could also represent a breakthrough release for those of a more alternative disposition. Either way, for the time being, Lau simply cannot lose.