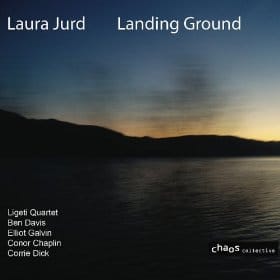 There are no easy paths into a successful jazz career, but the 21-year-old trumpeter and composer Laura Jurd appears to have everything sewn up at a very early stage. She has become an in-demand writer and performer whilst still studying on the jazz course at London’s Trinity College of Music. With the release of this debut album, she has received testimonials and support from some of the finest musicians on the scene, including the likes of Mark Lockheart and Liam Noble.

She has already won major awards, including the 2011 Dankworth Prize for jazz composition and the 2012 Worshipful Company of Musicians’ jazz award. With fellow musicians Elliot Galvin and Corrie Dick, both of whom appear on this debut album, she has founded the Chaos Collective which, following in the footsteps of the F-IRE and Loop Collectives, looks set to be the new leading light of London’s young jazz scene. It seems fair to say that Jurd is on something of a roll.

This defiantly individual debut has a very composed and organised structure, taking inspiration from the folk and classical worlds. For this reason, it is unlikely that it will appeal across the wide spectrum of jazz audiences. Those with open minds, and those with a particular preference for the European style of jazz centred around the ECM label, will however find the music to be rich, bright, elegant and rewarding. Laura’s regular quartet (Elliot Galvin on piano, Conor Chaplin on bass and Corrie Dick on percussion) is joined by the Ligeti Quartet to create a mysterious, enthralling chamber ensemble.

Jurd’s writing for the strings is particularly assured, and she clearly has the confidence to pursue her own compositional voice, utilising unexpected harmonies and conversational interjections and responses. Not only this, but the integration of strings and jazz quartet is handled particularly well here, something that is not always the case with jazz-meets-classical hybrids. The opening Flight Music is a brilliant example of the mood she is able to sustain – quietly intense but also open and spacious, particularly during her brilliantly constructed solo. The piece moves through a variety of moods and textures without sounding fragmented or incoherent. There is also a very strong sense of development – ideas and motifs often recur in different contexts.

One of the most satisfying aspects of Landing Ground is its carefully considered overall structure. The longer chamber group pieces are interspersed with three improvised duets, with Laura interacting with cellist Ben Davis, Elliot Galvin and Corrie Dick respectively. These pieces demonstrate her thoughtful preoccupation with sound and projection, as well as with the language of improvised music. Davis, also a member of Oriole and Basquiat Strings is the ideal musician for this kind of adventurous context. The duets with Galvin and Dick are both mercilessly concise at under a minute in duration, but they work as perfect miniatures, with not a single note wasted.

Jurd is careful with the use of sound, space and dynamics. She always begins her piece leaving room for increased tension and excitement and she seems preoccupied with contrasts. Even the sprightly The Lady Of Bruntal succeeds through its wide dynamic and textural variation. Laura also writes deft, imaginative melodies that seem to encompass a depth and range of feeling. The title of Happy Sad Song suggests this very aspiration – the emotions that arise from this music are far from stark or straightforward, and her music can be at once humorous and contemplative. This album may be titled Landing Ground, but it seems unlikely that Jurd’s ascent is going to end any time soon.