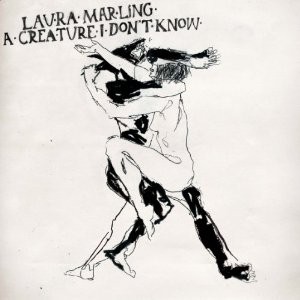 A Creature I Don’t Know follows just 18 months after her previous album, I Speak Because I Can. Produced again by Ethan Johns, it demonstrates another huge leap forward for Marling, capitalising on her growing self-confidence and showcasing yet another remarkably assured set of songs.

The first noticeable thing about Marling’s third album is that this feels much more like a ‘band’ album than the previous records. Opening track The Muse is almost a hoe-down, with banjos and strings to the forefront, and Marling unveiling a more flirtatious side than we’re used to: “You know what I need – why won’t you giveth me? Must I fall down at your feet and plead?”.

This more muscular sound is much in evident in songs like Salinas, which builds up in a beautifully intense manner, while the first single Sophia provides possibly the enjoyable musical moment in 2011 when the song switches key halfway through into a near jaunty Americana country-rock anthem.

Lyrically too, Marling is on top form. The aforementioned Salinas throws in Steinbeck references and the odd gem of a couplet like “My mother was a saviour of six foot of bad behaviour, with long, blond curly hair down to her thigh”. There’s some vivid imagery too in My Friends, which tells tales of “making rags for some uptown hags with their money in bags” while the epic The Beast has a dark undertow with a chorus of “tonight i choose the beast, tonight he lies with me”.

In fact The Beast, the epic centrepiece of the album, is possibly the most ambitious thing Marling’s ever written – nearly six minutes, it switches from dark and brooding to intensely angry as guitars howl all around her. It’s like Patti Smith and Joni Mitchell joined forces for a particularly raucous drinking session.

There’s still touches of the old Marling here – the startlingly worldweary Night After Night (“I should just leave you, instead I’ve deceived you”) has echoes of Leonard Cohen‘s Famous Blue Raincoat, while the closing sea-shanty sound of All My Rage is a gloriously lilting high note to end the album on.

Those who claim Marling is too aloof and distant to properly connect with will find nothing to disuade them here – but since when has an air of mystery been an obstacle to being a successful songwriter? These are truly wonderful songs that deserve to be pored over and analysed for months to come. What’s truly incredible though is the thought that she seems destined to get better and better.