Laura Marling – I Speak Because I Can 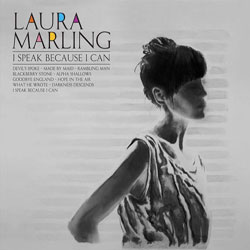 It would be patronising to call I Speak Because I Can Laura Marling‘s growing up record. She has always seemed older and wiser than her years; her startling Mercury Prize-nominated debut Alas, I Cannot Swim proved that. Two years on and I Speak Because I Can (the first of two album releases for 2010 – the next is due in September) is yet wiser still, steeped in the traditions of English folk and invoking Joni Mitchell, Nick Drake, Cat Power and even PJ Harvey in her less manic moments.

Its 10 tracks are remarkably rendered; combining a darker sound and more raw emotion from the singer this time around, with an added sophistication and a youthful vim driving it onwards. This is due in no small part to the production, courtesy of Ethan Johns (known for his work with Emmylou Harris and Kings Of Leon), which finds stark acoustic guitars interspersed with subtle woodwind and string sections and ghostly harmonies, allowing Marling’s deeper and more world-weary timbre to fully resonate.

“All of this can be broken” she implores gustily on opener Devil’s Spoke and, during album highlight Rambling Man, spouts some of her bleakest poetry to date: “How naive little me/ asking what things you have seen/ and you’re vulnerable in your head/ and you’ll scream and you’ll wail till you’re dead… It’s hard to accept yourself as someone you don’t desire/ as someone you don’t want to be.” This girl is twentysomething and these are weighty subjects indeed, all addressed with grace and astounding perception.

And it doesn’t stop there; the storytelling throughout this rootsy record is utterly compelling. Highlight Blackberry Stone finds Marling telling her lover: “You never did learn to let the little things go/ you never did learn to let me be” and in Alpha Shallows she sings of a man who will “work my heart till it’s raw”. This is heartbreaking stuff, and even on the prettier romantic-sounding ditties a sense of foreboding prevails, whether it’s in the strum of a vehement-sounding chord on the title track or in a line. “I try to be a girl who likes to be used,” she quietly drops in to the beautiful Goodbye England (Covered In Snow).

I Speak Because I Can is, without doubt, an album to really delve into, and one to lose yourself in for hours. Added to that, it asserts Marling as one of this country’s most talented young songwriters; our Conor Oberst or our David Berman. Never mind the cohorts she rose to fame with – Mumford And Sons, Mystery Jets and Noah And The Whale – those acts are fine and dandy, but the depth, flair and literary skill of Marling’s work is now in a different league altogether. We can’t wait for the next instalment.