Laura Marling – Once I Was An Eagle

by Matt Langham
published: 22 May 2013 in Album Reviews
Tweet 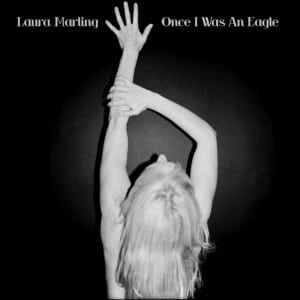 Artistic intent is notoriously difficult to pin down, yet the first line of Laura Marling’s new record is a clear statement. Signifying a continuing personal battle, Marling – slightly hesitantly and tremulously – sings “You should be gone beast / be gone from me,” over lazily thumbed chords. It’s somehow both self-flagellating and defiant, echoing the sentiments of her previous album, the troubled A Creature I Don’t Know. Few are born without demons; almost all of us wrestle them, gracefully or otherwise, and Marling is still facing hers down.

Once I Was An Eagle shows that she now speaks not because she can, but because she must. At the risk of falling into the well-established age trap, it’s easy to forget that Marling, on album four at 23, is a precocious talent. But, crucially, she’s never been a callow one. A career arc that produced a debut of winsome folk-pop at 18 is now concerned with clarity; the magnifying glass trained on herself. On a record that’s often winnowed and spare, each note ringing with purpose, it can make for an unforgiving listen as she tries to make sense of love, lust and loss, hoping to find her essence in the process. Yet it is a work that cements her reputation as one of the country’s leading singer-songwriters. This, of course, is a standing that’s earned and age-blind.

That matters are frequently hushed doesn’t herald lack of ambition. Running to a shade under an hour, it’s easily Marling’s most expansive work. Of the 16 songs, the first five – six including the ambient noise ushering in the insistent tumble of lead single Master Hunter – bleed into one, tied together by nimble arrangements. This song cycle, delivered as casually as a shrug, features a new eastern influence, pockmarked by the repetitive use of rising, sinewy chord runs and a tabla drone. The songs are seemingly plucked as easily as ripe fruit from a branch, but this belies their focus; it’s likely to be as powerful and unified a passage of music as you’ll hear all year. As a piece of work it reflects unapologetically keen and cool ambition, even daring. Yet it’s an enterprise she seemingly warns against, singing  “Don’t follow me / whatever you may hear or see” on Breathe.

The record may generally plumb the depths of dark, lissom folk, but it’s not totally asphyxiated by its own concerns – the clouds breaking on its second half following a brief interlude of lush, tripping strings. At times it’s the Marling of old. The hand-wringing over where she finds herself is displaced by reminiscences of where she’s been in the fuller instrumentation and breezier offerings of Udine, Once and Where Can I Go? A prominent bluesy wheeze of organ even harks back to Bob Dylan’s Highway 61 period, and listeners less patient with the atmosphere elsewhere will find plenty to enjoy.

Mentioning Dylan, Marling even adopts a nasal sneer at times, having name-checked a “freewheeling troubadour” earlier in proceedings in You Know; and it’s not the only allusion to other, often more senior, artists. The cover’s sombre portrait may well be a more subtle reading of Bat For Lashes’ arresting image for The Haunted Man – Marling instead turning away; vulnerability inward. More importantly, the record’s title dovetails with Bill Callahan’s Sometimes I Wish We Were An Eagle. Callahan, a noted mordant documenter of personal troubles, has a languid vocal style and is also known to obdurately follow his own compass. Marling refracts his obsession with paring down recordings, songs feeling lived-in and attention thrown to their details, like the swirls of fingerprint. Little Love Caster and Love Be Brave both bear the hallmarks: downbeat, even desolate, and featuring spry, almost classical guitar motifs – at times startling and effortless musicianship – they unfurl in their own time. Softly sung, at times almost spoken, Marling’s deadpan delivery is suddenly brightened by a melodic shift, or introduction of skeletal electric guitar or percussion, transforming the whole tenor of the song as her vocal delivery mirrors the change, wheeling away. Her diffidence and determination owe much to Callahan, and the record is stronger for it.

Once I Was An Eagle is really a character piece, a celebration of a still maturing, yet formidable woman. A continuation of the move away from her more melodic and accessible early work, it is the product of Marling’s steely determination, self-exploration and emotional candour. Sandblown and enigmatic, these are English folk songs that at times sound as if they’ve been established in the canon for umpteen years, yet the filter of tradition yields strangely enigmatic results; songs that are readily self-aware, but also conjure something unknown. Marling also is proving herself to be adept at handling themes and instrumentation that might sound slight in less capable hands, claiming the gravitas of seasoned writers in the process, steadfastly refusing to deal with anything but pressing human conditions. It’s a work that’s beautifully single minded, but may be a little too much of an undertaking for some. What’s inescapable is that it’s the sound of a person bravely questioning her place in the world, often in inspired fashion. As she puts it on the title track: “I will not be a victim of romance / I will not be a victim of circumstance.”