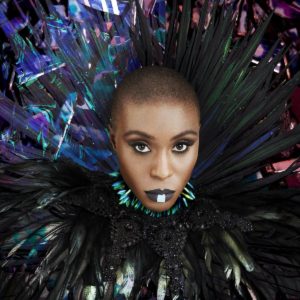 Ever since the days of Aretha Franklin and Dionne Warwick, there’s never been a shortage of big voiced soul divas jostling for attention, but every once in a while a new artist emerges who is lazily bracketed in that category when they’re actually doing something quite different to anyone else.

Midlands singer/songwriter Laura Mvula is a great example of this. While she certainly has a soul/gospel background – her CV includes a spell as Director of the Lichfield Community Gospel Choir – and a wonderfully rich, expressive voice, she also boasts a degree in composition from the Birmingham Conservatoire which is at least as big an influence upon her bold, ambitious music.

Mvula’s 2013 album Sing To The Moon was one of the most confident and original British debuts in years, blending more conventional soul, gospel and R&B textures with lush, spacey orchestral arrangements that owed as much to Brian Wilson as Nina Simone. Her impact was acknowledged at that year’s MOBO Awards, where she won both Best Female and Best Soul/R&B Artist.

Three years on, Mvula is back with Sing To The Moon’s follow up, The Dreaming Room, which essentially picks up where its predecessor left off rather than being a major leap forward. This is partly because Sing To The Moon unveiled a creative force that was already fully formed; supremely comfortable in her own skin and willing to experiment. So in a sense The Dreaming Room, clocking in at a tight 37 minutes, is more about reining in Mvula’s debut’s occasional excesses than trying to outdo its sonic expansiveness.

What we do see is a slight but perceptible shift towards a punchier, more urban style.  Opening track and recent single Phenomenal Woman, with its stabbing, pseudo-disco strings and thumping rhythms, sets the tone from the start, while the strident People features a duet with London rapper Wretch 32 and Overcome sees a collaboration with Nile Rodgers and his predictable –  if irresistibly funky – Chic guitar lines.

Thankfully, this doesn’t mean that Mvula’s gone all safe and mainstream on us.  The intricate, epic arrangements, multi-layered vocal harmonies and unexpected chord changes that made her name are still very much in evidence, and the new ingredients are woven into an overall tapestry that is as maverick and idiosyncratic as before. Let Me Fall starts off quite conservatively, but by the end it’s a whirlpool of interacting, swooping, echoing voices; Bread combines muted orchestration with a languorous, off kilter trip hop beat and tinkling piano; the aforementioned Wretch 32’s rap on People is swathed in feedback and ghostly sighing. The only real misstep is Nan – a conversation between Mvula and her grandmother – which is sweet but a little self-indulgent.

The guest musicians of the London Symphony Orchestra are generally a subtle complement to Mvula’s songs, but they take centre stage on the sumptuous, impossibly classy Show Me Love. A passionate, heartrending reflection on Mvula’s marriage break up, the brass and strings swell imperiously to project the singer’s pain as she cries “you show me love/of the deepest kind/I will never find love like you”. This clearly traumatic period in Mvula’s life is a consistent theme throughout the record, and it’s comforting to hear some vestiges of hope in the closing Who I Am as she chants “I have a life to live/I can only be who I am”.

No-one listening to The Dreaming Room will have any doubts about who she is. Laura Mvula has proved emphatically that her debut was no one-off and this highly accomplished return establishes her further as a unique, captivating talent.