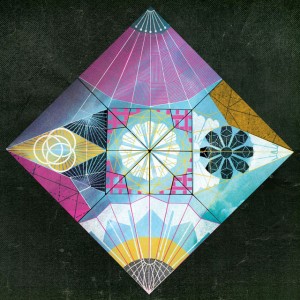 After the hushed traditional folk of July Flame, her instrumental score to the romantic comedy Hello I Must Be Going and the charming album of children’s songs Tumble Bee, Laura Veirs‘ ninth studio album Warp & Weft sees a return to her Americana roots.

Not that she ever really departed from them of course – over the last 14 years, she’s carved something of a well-respected niche for herself, together with the likes of Neko Case and The Decemberists, as a purveyor of high quality rootsy American folk-rock. Both Case and members of The Decemberists, together with Jim James of My Morning Jacket and kd lang, all appear on Warp & Weft, and while it’s no great departure to her previous work, it has a warm, comforting tone that will delight both long-term fans and new disciples alike.

Case makes a lovely cameo on the opening track, Sun Song, a bittersweet country ballad on which her and Veirs’ vocals mesh beautifully. It’s a low-key start to the album, and lulls the listener in perfectly. The lyrics are full of poetic imagery (“Stalked by winter solace in a small, warm hand, we’ve got the sun, the sun to thank”) and also introduces a preoccupation with motherhood which features heavily throughout Warp & Weft.

Recorded while eight months pregnant with her second child, it’s no real surprise that the topics of motherhood and a concern for the world she’s bringing her children into feature heavily. The thorny subject of gun control is tackled in America, with observations like “everybody’s packing heat in America” and “every mad men finds his peace in America”. There’s a nicely rugged electric guitar chugging through the track, and the repeated refrain of “America” ensures that the song sticks in the brain long afterwards.

Dorothy Of The Island also explores the subject of motherhood, with the downbeat chorus of “motherless children have a hard time”, but Warp And Weft really catches fire when Veirs broadens her palette. Album highlight That Alice is pretty much a three and a half minute biography of jazz musician (and wife of John) Alice Coltrane and features a blistering guitar solo straight from mid-period R.E.M. It also receives a nice callback on the jazzy, meandering White Cherry, which features a jazz harp, Alice Coltrane’s instrument of choice.

Sadako Folding Cranes, which provides the inspiration for the album’s cover art, tells the sad story of Sadako Sasaki, a two year old victim of the Hiroshima bomb who spent her final days attempting to fold 1,000 origami cranes. Bleak lines such as “she is blown out of the window, she is two years old” stick in the mind almost as much as the gorgeously crafted folky melody that tells the tale.

It may all sound impossibly depressing, but Veirs’ producer (and husband) Tucker Martine is on hand to make sure things never become too downbeat. Indeed, tracks such as Say Darlin’ Say and America are amongst the rockiest Veirs has ever been, and strange little looped interludes like Ikaria and Ghosts of Louisville do a fine job of threading the album together.

Veirs is at that stage in her career where she’ll probably never be a massive star, but is guaranteed to turn out album after album of expertly crafted songs. This is possibly her most satisfying album to date; it is, at times, quite spellbinding.