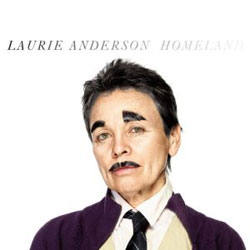 Laurie Anderson has always been equally at home with pop music and experimentalism, and Homeland offers us the most satisfying synthesis of those two worlds since 1981’s Big Science. Both albums marry personal, poetic composition with commentary on the issues of the day. Thirty years ago, she explored the role that technology was about to play in all our lives; now, she takes a broad sweep across the moribund Western approaches to economics, politics and the environment.

“You know the reason why I really love the stars?” she asks. “Because we cannot hurt them.” Throughout, this is sad, contemplative music with a point to make; with a poetic sensibility and delicate sound which raises her head-and-shoulders above more polemical social commentators.

Homeland’s music is like a silhouette: much of it is silent, the remaining notes giving only the essential outlines and leaving the rest for the listener to fill in within their own head. The raw materials are Anderson’s familiarly sparse electronica, violin and wonderfully expressive, innocent-yet-wise voice. This time round she includes some more florid elements – guest vocalist Antony Hegarty, the odd bit of techno. But they’re never overused and there’s no feeling of sucking the mojo from the cool kids: we’re not talking Tom Jones here. Homeland sounds beautiful, without ever resorting to cheap tricks, sonic or verbal.

We’re ushered in via the stunning Transitory Life, a Zen-like overview of 21st century human greed set to north African wind instruments, Tuvan throat singing and intermittent stomach-churning bass. The serenity, timelessness and otherworldliness of the music makes the case for the absurdity of avarice just as powerfully as Anderson’s lyrics: “It’s a good time for bankers, and winners, and sailors / with their stories of jackpots and islands of pleasure … they’re sailing through this transitory life.”

Only An Expert is by far the most accessible composition here, a slab of pounding electro which raises a quizzical eyebrow at our trust in so-called experts: TV hosts, bankers, military men, pundits of all hues. “Only an expert can deal with the problem,” she deadpans – and the phrase sounds more and more absurd each time it’s repeated. Experts solving problems that don’t exist, experts failing to solve problems that evidently do exist, and experts justifying problems that they’ve caused. It’s blistering stuff: “Just because all your friends are fired and you’re family’s broke and we didn’t see it coming it doesn’t mean that we were wrong.” And, as ever, Anderson’s cool, detached delivery makes the attack all the more devastating.

Another Day In America, a muted 11-minute spoken word piece, is the counterpoint to this; exploring ways to feel after the anger has died away. With her voice distorted into a sinister masculine tone, she asks “How do we start? How do we begin again?” Taking in old American stories, anecdotes and jokes over minimalist electronic swirls, it feels like a funeral elegy for the old empire.

It’s not all political, though: several of the compositions are personal in tone or poetically oblique. This takes us from the serene to the disturbing, often at the flip of a switch: “When the tears fall from both my eyes / They fall from my right eye because I love you / And they fall from my left eye because I cannot bear you.”

Referencing everything from Aristophanes to Kierkegaard to Oprah Winfrey, Homeland is true to the popular/classical crossover spirit of Anderson’s best work. But where it really achieves is in its completeness. Anderson’s music can sometimes feel unfinished without a stage show to accompany it, but Homeland is a standalone work of art. And what a work of art it is.