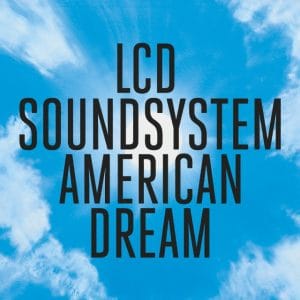 “It’s gonna have to be good enough, I can’t do this anymore, my brain won’t work.” So James Murphy confesses on recent single Tonite. Hardly an encouraging admission given LCD Soundsystem‘s American Dream is probably the most anticipated comeback record of the year. But then Murphy has always tried to pre-empt and derail expectation and criticism, as his outfit’s premature split itself suggests.

Before new material was confirmed, LCD Soundsystem hit the road in 2016, resulting in a tour which included triumphant slots at the Coachella and Glastonbury Festivals. So far, so sweet. However, that was the easy part. Bands do it all the time – some successfully, some less so – but there’s nearly always a level of satisfaction to be gained from seeing a much-loved group bash out the hits to a years-starved crowd.

LCD Soundsystem have always been great performers, so it stood to reason that their live prowess, coupled with an appetite born out of a near-five-year abstinence, would hit the spot. New material, on the other hand, is a different matter. Popular music history is littered with disappointment when it comes to the ‘comeback record’. Ergo, fans will no doubt approach American Dream with a degree of trepidation.

Happily, for the most part, any lingering doubt is unfounded even if, on first listen, American Dream sounds so familiar it’s a little disconcerting. Sure, there’s an expectation that the band sound like themselves, but initially, the synths, beats and Murphy’s vocal style feel a little too habitual. Other Voices reworks Us V Them, and Tonite can err too close to LCD-by-numbers for example. But then should we really expect to be dazzled by one of recent years’ most adept magpies? While LCD Soundsystem’s music has always cribbed from and re-imagined numerous touchstones and genres, had the hunter-gatherer in James Murphy finally exhausted his territory?

It turns out not. This record, more than any from their back catalogue, is a slow burn. It doesn’t have the spiky malevolence of North American Scum or the punchy pull of Daft Punk Is Playing At My House, but it does have depth to spare. Sonically, it’s the richest record they have produced. The nine-minute plus How Do You Sleep’s opening tribal beat and subtle digital tinkling leave Murphy’s cries of “I can’t hear you anymore” sounding like they are echoing out into the abyss. It’s a spooky and troubling opening, which builds gradually and magnificently to a crescendo capped with the repeated line “And six steps back.” Other Voices includes a lovely bass line that recalls Tina Weymouth on baggier form; Emotional Haircut dabbles in a cacophony of rhythmical layers, and Change Yr Mind apes David Bowie’s Fame guitar licks to great effect (his presence pervades the record more than any other LCD Soundsystem recording, which is saying something).

Lyrically, Murphy imprints himself seemingly without outside influence. American Dream is certainly the saddest record LCD Soundsystem has produced. These are songs battered by self-doubt, a preoccupation with getting older (a theme that has run through much of his work) and aching laments for his failure to connect. Time and time again he berates himself: “You know that you’re the only one who’s been destroying all the fun,” painting a picture of a party pooper extraordinaire. The themes of the record aren’t restricted to his own preconceived shortfalls, as more than ever his view is outward looking. Call The Police reflects political confusion: “Well, there’s a full-blown rebellion but you’re easy to confuse/By triggered kids and fakers and some questionable views/Oh, call the cops, call the preachers!” And Other Voices touches on division: “Your still a pushover for passionate people/and you’re just a baby now/with those soft hands and no eyes/resisting other voices.”

There are thematic crossovers between this record and Arcade Fire’s recent Everything Now, such as “Everybody’s singing the same song,” versus “Every song that I’ve ever heard/Is playing at the same time/It’s absurd.” But unlike Arcade Fire’s inglorious and patronising efforts (“Love is hard/Sex is easy” or “Be my Wendy, I’ll be your Peter Pan” to quote just a couple of that record’s lyrical horrors), Murphy is far more pragmatic and unsentimental, whether he’s debunking Hallmark sentiments – “Yeah, we don’t waste time with love/It’s just a push and a shove” – or demanding “So get up and stop your complaining”, he’s is pretty adept at calling bullshit when he sees it.

It’s difficult to believe Arcade Fire’s sentiments on Everything Now, feeling as clunky and forced as they do, but in spite of Murphy’s recent claims that he broke up his band to sell tickets, it’s his record that is the more convincing of the two. Despite his best efforts to sabotage a sense of authenticity, the messages on the record remain credible.

American Dream is flawed, human, and will only commit to one certainty: “You’re getting older/I promise you this; you’re getting older.” Yet it isn’t a depressing record. Like any other LCD Soundsystem album it will doubtless encourage folk onto their feet, and whilst Murphy may rue a perceived failure to connect, this is where he will unite others.

Equally, although these songs wreak of dissatisfaction in places, he’s no cynic, and while overall it’s a less immediate work than their previous efforts, the added complexity will no doubt ensure its longevity. The most instant song on the record is the lead single Call The Police, and while it might be an unabashed play for glory, he can be forgiven the pitch. After all, this time his fans still wanted a hit, and he deserved one. Murphy’s fallibility has proved to be his strength.