Lee Ranaldo – Between The Times And The Tides 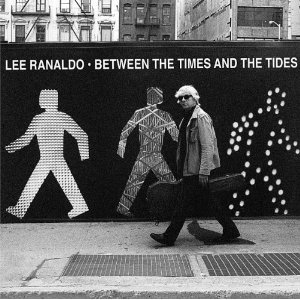 You have to feel for Lee Ranaldo. Between The Times And The Tides is his first stab at something approaching a straight up rock album (although not his first solo project) but before a note is even played it is being contextualised by the divorce of his Sonic Youth bandmates Kim Gordon and Thurston Moore. It’s fair to say that Ranaldo’s place in Sonic Youth was somewhat obscured by the presence of Gordon and Moore, so it must be somewhat galling to find them inadvertently providing context and a drama laden backdrop for Ranaldo’s latest effort.

Despite Moore and Gordon’s songwriting stranglehold on Sonic Youth it was quite often the Ranaldo led songs that were the most impressive, Karen Revisited, Eric’s Trip or Skip Tracer for example. With those compositions in mind, an album of Ranaldo songs that aren’t avant sonic experiments is a pretty exciting prospect. It would be unfair to expect Between The Times And The Tides to scale the heights of Daydream Nation era Sonic Youth, but it is by no means a bad album.

Much of this is down to the band Ranaldo has assembled around him which is a roll call of supremely talented musicians. On keyboards is jazz vetran John Medeski, sharing guitar duties with Ronaldo are Wilco’s Nels Cline and Alan Licht, while Jim O’Rourke pops up sporadically on bass and SY cohort Steve Shelley provides drums. Such an impressive cast might initially give rise to the belief that this might be an album that delights in twisting the conventional, but in truth everyone plays it fairly safe which is likely to disappoint those hoping for something mind blowing.

Opener Waiting On A Dream kicks off like a bastardisation of the Rolling Stones‘ Paint It Black and strolls off into muted Sonic Youth territory, albeit with a distinctly more prominent sense of melody. Off The Wall calls to mind early R.E.M. and possesses a chorus that even those who detest Stipe and co will begrudgingly accept is ridiculously wonderful. That familiar Sonic Youth sound works its way into the very bones of Xtina As I Knew Her making for a slightly unsettling listen as an elegant melody floats above a bottom end shot through with a distinctly menacing tone. Plane T Nice follows the college rock route sounding for all the world like something Bob Mould might knock off in a spare moment. Fire Island’s crazed guitar intro meanwhile, mixes Sonic Youth dissonance with J Mascis‘ jawdropping solos before settling down into some pretty unexpected countrified rock.

The psych-drone of Shouts is perhaps a little uninspired even if it does contain some rather exquisite slide guitar and utilises Medeski’s seething keyboard perfectly. Unfortunately, it heads into a sonic cul-de-sac at the midpoint with the noise/spoken word section provided by Ranaldo’s partner Leah Singer. It’s all too close to those Kim Gordon moments for comfort. Stranded meanwhile is a relatively featureless acoustic workout made notable only by the use of some appalling rhyming couplets.

The closing psychedelic rock of Tomorrow Never Comes undoubtedly channels the spirit of The Beatles‘ Tomorrow Never Knows and casts Ranaldo in the George Harrison role as the talented songwriter that perhaps never quite got his due in the band that made his name. Regardless of the sub-text, it’s an uncomplicated and summery close to an album that possesses few surprises other than the fact that Lee Ranaldo is as at home writing straight-laced rock songs as he is drilling holes in his guitars and attacking them with electric sanders.