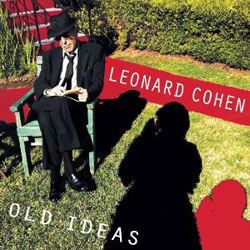 What an apt, wry, self-deprecating and Leonard Cohen-esque title this is for a new Leonard Cohen album. These days every move the master poet and songwriter makes has some sense of finality. This was particularly true of Old Ideas’ poignant but deeply strange predecessor Dear Heather and his hugely successful and lengthy tour felt not just like the first opportunity for a whole generation to see him perform live, but also possibly the last chance to do so. Yet here is Old Ideas – his third album since returning from his mountain monastic retreat, and arguably the warmest and most accessible part of his comeback trilogy.

There is little that is shocking, unpredictable or provocative about Old Ideas. Since returning to writing and recording, Cohen has pursued a pace that has rarely risen above the slothful and Old Ideas largely sticks to this template. The overall vibe here can probably be summarised as Cohen’s laconic shuffle. It will be completely unthreatening to Cohen’s loyal and massively appreciative audience.

There is, however, a more appealing balance here between acoustic instrumentation (Cohen even returns to plucking the guitar strings at times) and what might be uncharitably termed his bizarre budget Bontempi sound, whereby each song seems to compete for the cheesiest drum machine sound or the tackiest, most dated synthesiser patches. Only an artist completely confident in his own aesthetic can get away with this – Cohen knows the impact of the contrast between his articulate, profound and haunting words and the occasional tackiness of his music is eerily powerful. For once, though, it’s sometimes hard here to discern the source of some of the sounds. Is the aching string line on Show Me The Place synthesised or not? Are the brushed drums on Amen performed or programmed? Either way, they serve as perfectly unobtrusive accompaniments for Cohen’s graceful wisdom.

Whilst Old Ideas might unfold slowly and solemnly, at an Old Age Pensioner’s pace, this doesn’t mean it lacks life, insight and brilliant awareness. As so often in his long and fruitful career, Cohen remains concerned with the interaction between the spiritual and the physical life. He continues to address these perennial concern with a subtle, imaginative and playful use of language. He is a great commander of irony and dry humour, perhaps the very greatest still living and working in song form.

The opening Going Home, in which Cohen has a conversation with his artistic persona, is a masterpiece of such playfulness. It emphasises the gap between the Cohen perceived as a profound and generous artist and the less lofty reality of his day to day existence (‘he’s a lazy bastard living in a suit’) with a refreshing candour and honesty.

Cohen’s roots in Judaism and his subsequent embrace and rejection of monastic Buddhism have rendered his songs as secular or inter-faith hymns. Hallelujah, now cruelly ubiquitous, is of course the great depiction of the human physical experience as a sacred event. There are more psalm-like songs on Old Ideas (with Dear Heather’s The Faith possibly serving as a template). They are all delicate, understated and beautiful, especially Come Healing, during which Cohen’s cracked, sub-bass vocal tones are nearly subsumed by his modest choir of angels. On Show Me The Place, however, it almost seems like he is making a Bob Dylan-esque conversion to Christianity (‘Show me the place where the word became a man/Show me the place where the suffering began’). Either that, or his encroaching age is prompting him to search for the new messiah.

Even the songs grappling with big themes have a resonant, personal and idiosyncratic touch. Every languid melody and line of language is shot through with Cohen’s meditative, contemplative style. The wonderful Crazy To Love You, up there with his best songs, sees him reflect sardonically but also with genuine self-awareness (‘Crazy has deeper places to hide in than any goodbye’ or ‘I’m old and the mirrors don’t lie’).

There is one slightly unexpected and significant development on Old Ideas and that is that Cohen’s ruminations on age, mortality, regret, loss and depression often seem to find their expression in the form of the blues. Much of his music has been blues-tinged, but these influences have rarely been so overt. The Darkness, particularly, during which Cohen brilliantly relishes life’s more unfortunate twists and turns, is a perfectly formed blues, and the form really suits Cohen’s later, vulnerable, ever deepening voice. Whilst the tour revealed Cohen’s voice to be surprisingly strong and durable (a good deal clearer and more communicative than Bob Dylan’s), here he reverts to the softer, half-present, half-transcendent mode he adopted on much of Dear Heather.

Although Cohen has always had his legion of admirers, he has only recently received the proper critical praise long due to his massive contribution to the art of songwriting. With simple, delicate moments of memorable poignancy such as Banjo or Amen, he has now made a late masterpiece. Perhaps he can rest a little now, comfortably perched at the top of the Tower of Song.