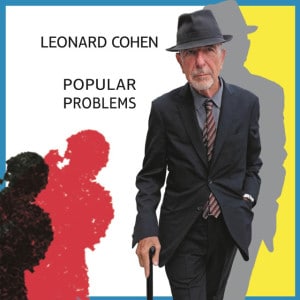 Leonard Cohen seems to be incapable of retirement. In fact, he has found new, increasingly wry and self-mocking perspectives from his pensioner status. On 2004’s Dear Heather (which, at the time, felt like a surreal swansong) he declared that “women have been exceptionally kind to my old age”. On the first song on Popular Problems, an album carefully timed to coincide with Cohen’s 80th birthday, he wants to slow things down – but, and be sure of this, “it’s not because I’m old”. Set to a slinky, skeletal blues groove, Slow is the height of self parody as art. “Let me catch my breath,” Cohen husks, “I thought we had all night.” If this really is Cohen’s last night (judging from recent interviews, it may not be), he’s going out laughing.

In spite of protracted touring well beyond any financial expediency, Cohen still seems to be on a Bontempi budget for some of Popular Problems. The sound rarely veers too far from the intentional demo-like feel he established first on Various Positions and I’m Your Man. The first leaked track, Almost Like The Blues, dry and apocalyptic in lyrical content, has a quiet unease in its minimal synth bass, piano and percussion backing track, bringing back to mind one of Cohen’s great masterpieces, Tower Of Song. If anything, this is even more ghostly and uneasy (with its images of ‘murder’ and ‘rape’), although this does not preclude the odd joke (“there’s torture and there’s killing, and there’s all my bad reviews”). Sometimes, the music seems to echo the singer’s dry humour, such as the bizarre synth horn stabs that periodically interrupt the cruise cabaret jazz of A Street.

Nevertheless, in working again with the same producer and co-writer who helmed Old Ideas, Patrick Leonard (previously more well known for his work with Madonna), Cohen has allowed some additional warmth to creep into the sound. There is room for contributions from both his touring band and some additional musicians. Alexandru Bublitchi’s violin elevates the country-tinged You Got Me Singing from an introspective ballad into something that sounds like a generous reflection on a life’s work (referencing as it does ‘the Hallelujah hymn’). Even more unexpected is the guest vocal contribution from kirtan singer Donna DeLory on the compelling, slightly sinister-sounding Nevermind. The most ‘live’ sounding (and arguably the weakest) track here, My Oh My, even resembles Tori Amos’ Cornflake Girl. Whilst the tempos remain mostly, ahem, slow, there is a more diverse approach to arrangement and style here. Clearly, it is never too late for surprises.

Touring has, it seems, reawakened something in Cohen. On parts of Ten New Songs and Dear Heather, he seemed content to become a spectral presence, haunting the background of his songs. Throughout Popular Problems, his voice is centre stage, stark, untreated and clear. It also displays some of the ravages of his work schedule too, sometimes becoming a growl when pushed further forward. This often serves to further emphasise the gravity and insight of his lyrics, none more so than on the extraordinary Did I Ever Love You, where Cohen sounds genuinely questioning and vulnerable. The song veers from haunting confessional to unexpected double time country shuffle, which might provide a hint of reconciliation to its story. Even more haunting is Samson In New Orleans, dealing with the aftermath of Katrina. It is one of his most beautiful later songs, easily the equal of Coming Home, The Faith or Alexandra Leaving.

Cohen claims to have been working on these songs for decades, and many of them at once encapsulate and transcend the contents in which they were first penned. Although initially a response to 9/11, the story of A Street is simultaneously both highly personal and universal. As an elegy rich in Biblical and philosophical solace, Samson In New Orleans might apply to any city affected by tragedy. Popular Problems is only 36 minutes long but it is far from slight. At such short duration, it seems a shame that Cohen could not find room for I’ve Got A Secret, the only new (and very funny) song performed during the Old Ideas tour. This album feels perfectly formed as it is though, and if Cohen stays alive and healthy for another couple of years, that track may yet surface on the next album on which he claims to already be hard at work (jokingly calling it Unpopular Solutions). “You got me thinking that I’d like to carry on,” he muses on You Got Me Singing. Let’s drink to that.