Leonard Cohen – Thanks For The Dance 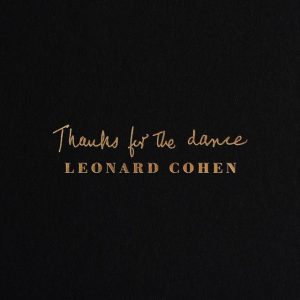 In October 2016 Leonard Cohen released what would be his last studio album released during his lifetime. Anyone who has heard You Want It Darker will be well aware of how in touch with his own mortality Cohen was. Lyrically there was a sense, much like with David Bowie‘s Blackstar, that this was a piece of work by a man facing the inevitable. Musically it featured a style in line with that of the few albums that proceeded it. The only guest of note was a backing vocal from Alison Krauss. The album received almost universal positive acclaim.

Prior to his death, Cohen shared some basic song sketches with his son Adam that would form the basis of a future album. Thanks For The Dance is these sketches in their finished form. Whereas You Want It Darker was largely recorded with a core group, the cast list of Thanks For The Dance is both bigger and full of indie stars. Beck, Feist, Richard Reed Parry from Arcade Fire, Bryce Dessner from The National, s t a r g a z e, Damien Rice, Daniel Lanois, Patrick Watson and Zac Rae from Death Cab For Cutie as well as Cohen regulars Jenifer Warnes and Sharon Robinson all appear. With such an extended group there may be expectations of a big, grandiose sound echoing Cohen of the ’80s, but what transpires is an album which plays out with incredible fragility. At no point through these nine songs do you get anything beyond subtle musical additions to go alongside what is essentially an album of poetry recitals.

Opener Happens To The Heart is a simple song featuring low flamenco guitar, some piano and strings playing behind Cohen reciting reflective lines. Phrases like “Now the angel’s got a fiddle, and the devil’s got a harp, every soul is like a minnow, every mind is like a shark, I’ve opened every window, but the house, the house is dark” give a clear indication of the tone of what is coming; reflection, anticipation, love and darkness.

Arguably the album’s finest moment is The Hills. As a song it’s probably most evocative of classic Cohen and seems to be fully embracing of the sound found on his last few tours; a slow drum beat, increasing instrumentation and a soaring female choir: “Listen to the hummingbird, whose wings you cannot see, listen to the hummingbird, don’t listen to me” are the last lines sung here. If these are Cohen’s last words to be released then these are genuinely perfect lines to finish. As much as You Want It Darker was, in hindsight, a perfect album for someone approaching the end, Thanks For The Dance feels like the perfect epitaph.

As such it’s a beautiful, fitting send off to one of music’s finest lyricists and an excellent postscript to an incredible career. At a time when Nick Cave seems to have in some ways filled his void, it is interesting that this album is almost the perfect companion to Cave’s latest release, Ghosteen. Both albums, as well as being overwhelmingly sad and lyrically intense, also offer a sense of optimism, peace and hope. The album helps the listener find light in times of dark, offering reassurance that, whatever the circumstances, poetry and music can become the salvation we all need.