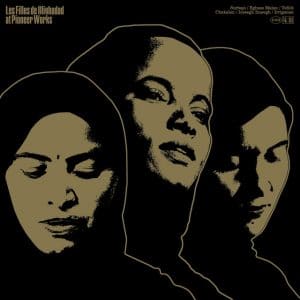 On paper alone Les Filles de Illighadad are a tantalising prospect. While Tuareg rock and so-called desert blues have become firmly established worldwide, through artists like Ali Farka Touré followed by Tinariwen, then more recently Mdou Moctar and Bombino, women have remained absent in its ascent. That is until the ‘daughters of Illighadad’ were founded in 2016 by solo guitarist Fatou Seidi Ghali and vocalist Alamnou Akrouni.

They were later joined in 2017 by Amaria Hamadalher and Abdoulaye Madassane, and much like Mdou Moctar, were picked up by Sahel Sounds’ Chris Kirkley. His curiosity was first spiked as he’d never seen a Tuareg woman play guitar and Ghali is widely attributed as the first ever Tuareg woman to play guitar professionally. While this detail alone places the group in groundbreaking territory, the music they produce further expands on their trailblazing origins.

At Pioneer Works was recorded over two sold out shows in New York in 2019 and it’s immediately apparent that this music lends itself to a live record. The warmth and detail of this highly sensitive recording beautifully presents their natural wonder. While their male counterparts have reimagined traditional tende music though guitar, the most recent notable addition being Moctar’s explosively inventive Afrique Victime, Les Filles de Illighadad more closely echo the origins of Saharan folk music.

That’s not to say they aren’t as boundary pushing in their exploits. Telilit beautifully exhibits the deeply felt collectivism that lies at the heart of their work. Percussion, guitar and voices all work in unison and the building repetition is entirely hypnotic. Equally, the call and response vocals of Chakalan prove intoxicatingly meditative, even so, the band’s creations are far from gently pensive. Make no mistake, this is weighty music that also displays an intrinsic realism.

Les Filles de Illighadad’s sound is resolutely led by rhythm and the aforementioned track is one of many examples of the lively drone they create through a litany of sounds. Closing track Irriganan is another shining example of this in action; it’s impossible not to get lost in its vivacious rumble. A great deal of Tuareg guitar music could and is described as psychedelic, largely due to mind melting guitar acrobatics, and there is no doubt that Les Filles’ music is similarly lysergic. That said, it comes from a different place, the collective efforts of every member.

At Pioneer Works is perhaps their definitive recording to date, largely due the fact that this is music that should be heard live. You can clearly identify an energy and immediacy that doesn’t quite translate to studio recordings. In that, the band have captured their tenderness, inventiveness and profound talent. The record feels timeless and sacred, but as the title suggests, it’s also boldly pioneering.

We remain lucky that the music of the Sahara region of northern and west Africa has reached beyond its native geography, but up until now our experience of this music has been exclusively male. Les Filles de Illighadad are proof positive that this must change and that the origins of tende music be more fully honoured.