Liam Gallagher – As You Were 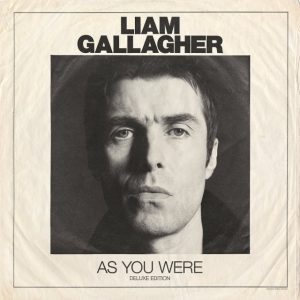 Liam Gallagher’s first solo album, three years after the fizzling out of his post-Oasis band Beady Eye, is surprisingly good. It is named after the sign-off he uses for his Twitter posts, but also suggests a backward step, a return to the raunchy rock ’n’ roll basics that the retro(grade) Gallagher brothers made their name with. But in fact As You Were feels like Liam, at the grand old age of 45, maturing musically – up to a point.

On the cover, he eyeballs us as truculently as ever as if snarling, ‘Are you looking at me? And if not, why not?’ Yet the songs reveal a softer, more reflective character than you’d expect, a strange brew of vulnerability mixed with swagger. After reaching middle age, experiencing the comedown of Beady Eye following the highs of Oasis, and going through two divorces, as well as the very public breakdown of his relationship with big brother Noel, it seems he might be growing up at last.

Though he’s contributed, Gallagher has not become known as a songwriter while the frontman of his two previous bands. But now, as a solo artist, apart from on a couple of tracks, he has had a hand in all the songs, and indeed wrote half by himself. It’s the first time that he has used the services of external professional songwriters, which may show he needed help in rescuing his career, but also that he has opened himself up to new ways of working, away from the old template within a band of rock musicians. It is to his benefit.

Most of the album is produced by British indie producer Dan Grech-Marguerat. But Grammy-nominated American songwriter, multi-instrumentalist and producer Greg Kurstin – best known for collaborating with stars like Adele, Taylor Swift and Katy Perry – has added some bright pop sheen (especially to stand-out song Wall Of Glass), while the more alternative American musician Andrew Wyatt, latterly of Miike Snow, has also contributed to several songs.

If Gallagher’s songwriting has evolved with a little help from his new friends, he has definitely been working on his own singing to great effect. His default mode has always been one of ballsy gusto, belting out rockers – a narrow range that he executed with considerable conviction. But he has widened his repertoire here by going for higher notes and following the melodic line with more warmth.

Unfortunately, though the music sounds refreshed, much of the lyrics are a mess with their half-baked sentiments and unconvincing half-rhymes (eg. “You were sold a one direction / I believe the resurrection’s on”). Ah well – as you were.

The album features a surprising number of slower-tempo songs and power ballads, often with discreet backing from strings and brass. The usual musical influences are on show, including The Beatles (especially John Lennon), The Rolling Stones, T Rex and Slade, with Gallagher even sometimes directly quoting from his heroes’ material: “purple haze”, “gimme shelter”, “helter skelter”, “’Cause happiness is still a warm gun”, “tomorrow never knows”.

Lead single Wall Of Glass is a super-catchy slice of disco-rock with soulful female backing vocals, blasts of harmonica and shards of guitar shattering everywhere. Also very tuneful is Bold, the first song Gallagher wrote as a solo artist, which asserts his own headstrong character while perhaps also reflecting his divorce from Nicole Appleton in 2015: “I’ve been bold / I didn’t do what I was told.”

Greedy Soul reverts to type as an all-out rocker with some rather silly vampire horror imagery: “She got a six six six / I got my crucifix / She’s got a spinning head / Like seeing Grateful Dead.” Paper Crown, though, is a much gentler, folksy number with acoustic guitars and Gallagher reaching for his falsetto – and finding it.

For What It’s Worth is a mid-tempo song with a similar vibe to Look Back In Anger, looking back at the mistakes he’s made in his life – a sort of apology to those he has hurt, including possibly an olive branch held out to Noel: “Let’s leave the past behind with all our sorrows / I’ll build a bridge between us and I’ll swallow my pride.” Even more Fab Four in sound is the simple love song When I’m In Need.

You Better Run is a menacing glam-stomp with Gallagher threatening to see off young rock pretenders to his crown: “I see you, you think you’re something / Well you’re nothing, you’re a butterfly.” The tempo is still high with I Get By but the subject is the pain of breaking up.

The slow roller Chinatown is the most chilled-out track which at one point gets quite fuzzy.  Come Back To Me has darker notes but is a plea to get back together. Universal Gleam promises to his faithful love “I won’t ever let you down”. And I’ve All I Need exudes a mellow mood of acceptance: “Slow down, all things must pass / Take your time, know the score.”

Gallagher is never going to win awards for originality, but he has definitely progressed musically with this solo debut. With Noel and his High Flying Birds releasing their third album next month, the brothers are due to go head to head again. This time, however, Liam can feel confident he will hold his own.