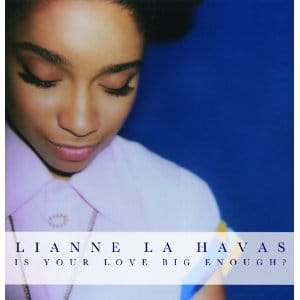 Lianne La Havas’ debut album has been a long time coming compared to some of her fellow artists shortlisted for BBC Sound Of 2012. In fact, her name was one of the few predictable choices among the class of 2012 following her impressive performances of No Room For Doubt and Age on Later… with Jools Holland back in October 2011. That performance impressed Bon Iver frontman Justin Vernon so much that he invited her to support them on their North American tour in December.

And the 22-year-old Londoner, who previously sang backing vocals on tour for Paloma Faith, has continued to impress ever since she was nominated as one to watch. Her debut EP Lost And Found was critically acclaimed and a support slot for Bombay Bicycle Club underlined her appeal. And if such exposure comes the inevitable pressure to live up to expectation, you’d not know from listening to La Havas’ debut LP, Is Your Love Big Enough?

From start to finish this first studio effort, produced by Matt Hales, oozes a relaxing, sultry sound, one that demonstrates her outstanding vocal talent and her ability as a storyteller. As was evident on early singles, La Havas’ debut explores her experiences of relationships up until now, with her long-time fondness for Jill Scott clear in her personal writing style. The delicate finger-picked No Room For Doubt is a perfect example of La Havas’ subject matter, as she sings: “We all make mistakes, we do/ I learnt from you.”

Then there’s the more candid Forget, where the grittier guitar riff complements her lyrics about an ex-boyfriend, singing bitterly: “Waste all your time writing love songs, but you don’t love me”. Meanwhile, Don’t Wake Me Up is a mesmerising opener, which begins with La Havas’ stunning vocal before a laxidasical beat and twinkling guitar are added to the mix. It’s a calming and atmospheric start the album, which shows off the simple, but beautiful, elements that made La Havas so appealing in the first place.

If La Havas was feeling the pressure of expectation it certainly doesn’t show on her debut. The album is solid from start to finish, with her early singles sounding at home amongst the newer material. The piano-laden Lost And Found is as affecting as it was on first listen, with the poignancy of La Havas’ fragile vocal adding to the sense of heartbreak in the song. It runs perfectly into early track Au Cinema, which was first heard as a live recording on an EP, with its shuffling beat and occasional flickering guitar lending poignancy to an old-fashioned tale of romance at the movies.

Although La Havas is not exactly the first female singer-guitarist to bare all through her lyrics, her enchanting vocals and wandering melodies are wonderfully constructed, and call to mind the jazz-lite stylings of Corinne Bailey Rae. Like the Leeds lass’s output, La Havas’s material gets a bit too familiar by the time the album reaches its conclusion. Elusive is another gentle, melancholy track with the vocal the focus once more, while Gone lacks the direction or conviction of the striking album stand-out, Everything Everything.

Quibbles aside, Is Your Love Big Enough? is an accomplished debut from La Havas, confirming the talent she possesses, even if it is not without its problems. At times, it sounds as though La Havas is safely within her comfort zone and has no idea what life – and music – might be like outside of it. She will need to explore uncharted territory in future to ensure her longevity in a tough market, but if she can push the boundaries on her next record, then La Havas here suggests she’s set for a very bright future indeed.