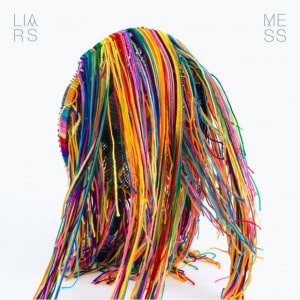 “Take my pants off, use my socks, smell my socks, eat my face off, eat my face off…” Well, what do you know? Liars are back. Everyone’s favourite NY deviants have returned with not only their best album, but the one most likely to get your ass out of your seat and onto the dark, sticky dancefloor at 4AM when you really should be in the cab home.

WIXIW was a trip – a true Mute album, all pristine, sterile electronics and processed beats that screamed ‘new direction’. Sisterworld and Liars were fantastic in their own right, but were overshadowed by the experimental, polarising triptych of their incredible first three albums. Debut record They Threw Us All In A Trench And Stuck A Monument On Top was a tremendous blend of post-punk and dance music that was tagged with the curiously short-lived ‘dance punk’ label. The follow up They Were Wrong So We Drowned is where all the magic happens: it’s an album so vile and abrasive that it garnered terrible reviews, but is still many a fan’s favourite Liars record, and for many reasons. Drum’s Not Dead rounds out Liars’ holy trinity, and that too is a monster – not as obnoxious as They Were Wrong and not as direct as the debut, but possibly more entertaining and listenable than either.

This record is Liars making music to have good times to – for the first half of the record, at least. Angus Andrew, Aaron Hemphill and Julian Gross are getting more and more of their much-deserved plaudits, and Mess will only add to their incredible status.

Mask Maker opens with those laugh-out-loud funny commands – quite what they mean by ‘use my socks’ is unclear, but they convince you it’s the only appropriate course of action. The track bounces along on a fat stomping beat, while wobbling, oscillating synth lines bubble and shake. Follow-up Vox Tuned D.E.D. has a rasping, fuzzy rhythm, creepy swathes of synth and Angus Andrew’s signature portentous groaning. Its swaying, bobbing feel completely counteracts the funereal vibe they’re conjuring, and when (at 3:44) Andrew starts rhyming with the same flow as Missy Elliott on Get Your Freak On (seriously) you start to get the impression that Liars can get away with pretty much anything.

I’m No Gold builds, incrementally, from its thudding beat up through to its clicking, popping final state, where the listener finds Andrew in playful (if slightly disorienting) falsetto mode. Pro Anti Anti, which follows, alternates between crashing industrial-isms and soothing, twinkling harp sounds. Liars have made a career out of juxtapositions – even the label they were first tarred with – ‘dance punk’ – doesn’t make any conceptual sense. But Liars make it work.

The woozy, synthetic atmosphere of Can’t Hear Well leads into the single, Mess On A Mission. Mess on a Mission is a scintillating slice of crunchy electronica with Andrew’s “facts are facts and fiction’s fiction” mantra echoing around the room long after the track’s finished. The blips and bleeps bring VCMG’s triumphant 2012 EPs to mind – Martin Gore and Vince Clarke’s Mute pedigree allowed them the space to create a late-career highlight, whereas Liars’ evolution into a true Mute act with WIXIW, and now Mess, has allowed them to supersede many of Depeche Mode or Erasure’s well-respected collections.

The second half of the record is a radical change – chilly moods and frosty soundscapes make up a large part of flip-side. Urgent, miserable instrumental Darkslide serves as the introduction to Boyzone, where scrapes and dull pulses comprise the sound-design which frames more of Andrew’s dour groaning.

Dress Walker and Perpetual Village vie for the darkest tones on the record, but that award ultimately goes to closer Left Speaker Blown. Perpetual Village has a sinister feel exacerbated by witchy moans and creaking echoes (think Jason Voorhees). Dress Walker is a downbeat, motorik number with hushed atmospherics and sci-fi synth licks.

Left Speaker Blown has a wintry, dreamy ambience that Genesis P. Orridge and Throbbing Gristle once specialised in; there’s a constant, looming threat of horror but no grisly pay-off to speak of, for the record just dies in silence. It’s amongst Liars’ darkest ever moments, but like anything they do, it can’t be taken too seriously. As always, it seems as though they’re playing with us.

Ask a certain kind of person and they’ll tell you that Liars are the best band in the world; ask another and they’ll tell you that Liars suck. Depending on where you sit on the scale determines what you’ll think of this record. If you’re in the former camp, get ready to be entertained. If you’re in the latter, for now, let this album change your mind. Either way, this is undoubtedly Liars’ most engaging work, and certainly the best Mute album since, well, WIXIW.