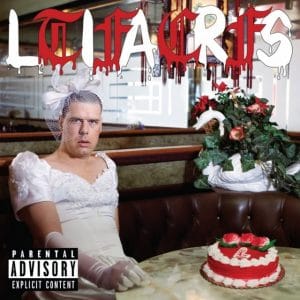 In the final moments of No Help Pamphlet, a twisted and morphed voice message enters the fray. Presumably it’s from Liars’ sole remaining member Angus Andrew and directed to his erstwhile writing partner Aaron Hemphill. “OK, that’s it. Those are all the songs I really like…” drawls Andrew, “I hope that you have a really great break. And I’m thinking of you all the time”.

On the cover of TFCF – or to give the album its full title, Theme From Crying Fountain – Andrew is sat in a wedding dress, looking pissed off and baffled, having been dumped at the altar, or presumably before even getting to the altar. If the message weren’t clear enough, TFCF is essentially a break-up album. After 15 years, Liars has finally whittled itself down to being a solo project; with Julian Gross and Aaron Hemphill gone, it’s up to Andrew to go it alone. It’s perhaps the dissolving of the creative partnership with Hemphill the bites the most, and with much of the album built from parts of what would have been the next Hemphill/Andrew incarnation of the band, TFCF is essentially a musical version of a wedding photo torn to bits and hastily stuck back together again. Why all the eyes have been scratched out and how those bits of Take A Break, National Geographic and What HiFi? got in there is anyone’s guess.

In the aftermath of the split with Hemphill, Andrew set up camp on an island just off of Sydney, and began assessing themes of loneliness, loss, and nature. The result is an album that is, to some degree, quite introverted but it is also one of the most peculiar Liars albums to date in that it grabs influences from everywhere and throws them into the mix. It’s fair to say that Liars’ heart was breaking and stopping suddenly on Mess, their last album as a two-piece, on TFCF, Andrew does a fine job of applying CPR.

TFCF is, initially, an album in search of an identity, Andrew seems to be throwing every idea he’s ever had into the mix and hoping that it finds some kind of form. Understandably, most of these songs see things through a darkened lens. Opening up with The Grand Delusional, Andrew immerses us in what might be best be described as a kind of Industrial Folk song. Acoustic guitars merge with a hurt vocal that addresses the plans the pair had, creaking wood, and an incessant, threatening drum pulse, before settling down into a refrain of “they can take our insides” that rams home exactly how Andrew feels about the situation he found himself in. From there, it seems obvious where Liars should go next, and Cliché Suite invents Tudor Dancetronica and then places it in midst of a washing machine cycle. From there the thunderous stomp of Starting At Zero channels the unsettling thrum of Throbbing Gristle and marrying it to Andrew asking “Why can’t you shoot me through my heart?”. The pain and frustration caused be the split is clear on the early parts of TFCF, at times it is incoherent and wildly out of control, which is exactly as you might expect. There’s a fair amount of anger mixed in with a strange kind of acceptance that things might have run their course for the pair, most telling summed up in the line “we both became the thing we would have killed before – we both maintain complaining on the mountainside”.

Things start to change with Face To Face With My Face as Andrew seems to warm to the task of being creative on his own. There’s an element of pain still in the lyrics, but it’s here that Andrew really begins to channel his surroundings. Having relocated to his small island, it’s possible to hear the chirping of bugs and the drone of a didgeridoo as what starts off as a rather oppressive exploration of the self becomes something more magical. Ripe Ripe Riot explores similar expansive territory musically, whilst Andrew croons beautifully over the top in a style reminiscent to The National’s Matt Berninger, whilst the brief closing track Crying Fountain achieves a comforting ambience.

Alongside these forays into atmospheric territory, Andrew also finds time to throw a bit of folk into the mix on Emblems Of Another Story, bundle through a little ramshackle honky tonk on No Tree No Branch, and channel Beck and My Sharona on Cred Woes.  TFCF might well be an Angus Andrew solo album under the Liars banner, but what he’s achieved here fits within the his band’s remit for consistently morphing and confounding expectation. More importantly, it’s heartening to see an album as intriguing as this emerge from such a traumatic time. Hopefully Andrew can burn his wedding dress, eat what’s left of the cake, and move on.