Liars – They Were Wrong, So We Drowned 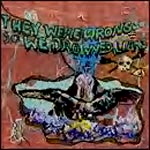 Most bands treat their second album as a consolidation exercise, keen to satisfy the fan-base they have just spent years of hard toil acquiring. Room On Fire is a classic case in point. A superb album, clearly, but no risks were taken whatsoever whilst devising it. I can picture the large “If it ain’t broke, don’t fix it” sign on The Strokes‘ studio wall.

But Liars are not “most bands”. Liars are completely crackers. Having wow-ed us with the controlled stupidity and punk-funk chaos of their debut (They Threw Us In A Trench And Stuck A Monument On Top), and having played a major part (albeit accidentally) in forming the painfully fashionable New York scene that The Rapture, Radio 4 and their ilk now boss, they’ve jacked the whole thing in and made this – an utterly bizarre concept album about 16th century European witchcraft.

Much of their justification for this career sidestep is admirable. The superb rhythm section that so marvellously glued together the lunacy of Liars’ first album were promptly sacked. This meant that the songwriters – singer Angus Andrew and guitarist Aaron Hemphill – no longer had their ideas channelled and diluted through the fingers of others.

There was also a belligerent desire to escape from the unjustified “Post-Punk Brooklyn Art-Dance” pigeonhole that the press had happily stuck them in. Moreover, it’s more than refreshing to see a band do the exact opposite of playing it safe. For the Liars, there is no thought of commercial compromise on their artistic mission.

So if the theory is admirable, is the music? On the whole: not really. Compared with the tight bass lines, sharp chords and arresting nonsensical yells that characterised their previous output, many of these “tunes” come across as structure-less dirges, as drawn-out stoned studio jams. The White Stripes can prosper without bass, but this was Liars’ key strength. In abandoning this crucial aspect, they’ve shot themselves in both feet.

Having said that, there are reminders that this band can still be peerless. Single There’s Always Room On The Broom marries buzzing industrial (keyboard) bass with demented cackling vocals, all randomly cut up with sections of what sounds like ZX Spectrum games loading. And We Fenced Other Gardens With The Bones Of Our Own sounds exactly like a song about witchcraft should: gothic chanting, primal wails, and heavy pounding drums.

Elsewhere, it’s pretty heavy going. The press release compares the exercise with fellow New Yorkers Sonic Youth‘s deeply experimental Bad Moon Rising, which was a similar ordeal for the listener back in 1985. It is to be hoped this comparison holds true, for then we’ve got the Liars’ Evol, Sister and Daydream Nation to come. That’s if anybody is still listening…