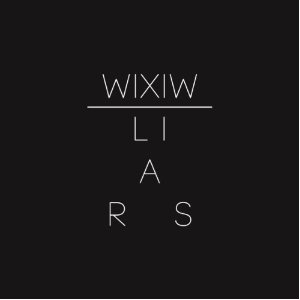 Liars, it would seem, have an endless supply of ideas. From the punky outburst of They Threw Us All In A Trench, to the witch based concept album of They Were Wrong So We Drowned, via the percussion meets drone experimentalism of Drum’s Not Dead, they’ve consistently explored new ground. Now they’ve turned their attention to electronica. WIXIW is at the very least up there with their best.

Liars themselves are not out and out electronica artists, and as a result they’ve been feeling their way in producing the sounds that populate these songs. Although they’ve enlisted Mute boss Daniel Miller to produce and lend expertise, it is to Liars’ advantage that this particular method of creating music is still quite new to them as they’ve not had time to become swamped in the conventions and processes of the genre. These songs may have been created on computer and using synths, but overall the feel remains organic.

The fact that the band themselves aren’t entirely sure how they created some of the sounds on the album points towards a songwriting process blessed with a happy accidents and some apprehension. It’s a dichotomy that the album itself possesses. At times WIXIW is a positive synth pop wonder, at others an ambient melancholic haze. Occasionally it combines anxiety and positivity within a single bar.

Opening with The Exact Colour Of Doubt (a title that displays its fair share of ambiguity) Liars quickly immerse themselves in ambient swirls and a restrained vocal from Angus Andrew. With a light skipping percussion and a bass line that’s approaching dub strength, it’s a surprisingly gentle introduction. Yet as delicate as it sounds, there’s a sense of foreboding in those coiling electro clouds, and in Andrew’s slightly obsessive lyrics. Things get more forceful on Octogon with its driving bass and intergalactic-highway sound effects. Hidden in amongst the skittering beats and electronic layers, Andrew contemplates a relationship – sounding remarkably pissed and entirely uncertain.

No.1 Against the Rush is the first relatively uptempo track on the album, and possibly the closest Liars get here to a pop tune. With its ’80s tinted drum pattern and keyboards that riff on Close Encounters style communications, it drifts towards Depeche Mode territory and hints at what The National might sound like should they attempt to go electro.

Where WIXIW differs from its predessors is in its lack of a song that explodes into a flaming ball of fury. There’s a pent up anger that resides in much of Liars’ material, but such explicit outbursts are absent here. Instead all the feelings of rage and turmoil are hidden within the layers of the songs – not unlike Andrew’s wispy, apathetic vocals.

III Valley Prodigies with its use of bird noise offers a modicum of natural sound to what is predominantly an electronic album but, in so doing, creates an unsettling atmosphere almost instantly, calling to mind Hitchcock’s The Birds. The organ of the title track might start off with classical pretentions, but it soon becomes woozy and disorientated, before being engulfed under a tumult of drums.

In other words, the violence is there, but it is being expressed differently this time. The heavy dance thrum of Flood To Flood is the perhaps the only time the Liars of old breaks through. With serated synths, propulsive drums and Andrew’s begging of “tie me up in a red ribbon – teach me how to be a person” it becomes weirdly euphoric, utterly threatening and represents the most immediate thrills on the album, although the Underworld stomp of Brats runs it close.

WIXIW is a wonder of an album of endless layers and contrasts to get caught up and lost in. It’s not always a pleasant listen, but it is without doubt one of the most rewarding you’re likely to hear this year.