Lighthouse Family – Whatever Gets You Through The Day 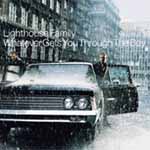 Lighthouse Family, one of the late 1990s’ biggest-selling UK pop acts, introduced us to their new album by way of that tried and tested promotional means, the first single. Free / One, was, while remaining exactly of the hopeful, uplifting texture we’d normally expect from this band, rather bizarre for mixing U2‘s classic One with their own lyrics and somehow almost getting away with it. As ever, the video prominently featured Tunde Balyewu and a blurred Paul Tucker in the background. So far, so nearly normal and expected.

But for a group so fabled for bringing out those not normally seen buying records into record shops (typical stereotype Lighthouse Family fans including sales reps and stockbrokers), Lighthouse Family’s prodigious pop talents are too often overlooked. There is so much utter rubbish dominating the output of the majors for the listening of the masses that, when Tunde’s simplistic but all-consuming vocals begin you know you are in for something which will not only raise your spirits without making you grimace, it will also be skillfully put together by the group themselves. Paul Tucker, it is worth noting, writes just about the entire album. Like nearest rivals Simply Red, Lighthouse Family simply never put a poppy foot wrong. Everything is slickly produced and offered with a touching sincerity which at once acknowledges their artistic talent and the limitations of their musical vision. But if you’d sold as many millions of records as these guys, would you change your formula?

End of the Sky is typical of the album, full of digitally enhanced strings, lovely harmonics from a backing choir and Paul Tucker’s knack of a snappy melody, overwhelmed by Tunde’s velvety tones. Since their first foray into major label success with Ocean Drive it has always been clear what Lighthouse Family were catering for – and it is difficult to take issue with a band who know their market so well and then have the talent to play to it. Sometimes, you do wonder what Tunde’s instantly recognisable vocals could otherwise be used for, but other than easy listening jazz, it is difficult to imagine where his voice would be as at home as it is here. Wish gets about as close to rock as this band is ever likely to – I dare Polydor to release it as a single, for it is easily the best track on the album.

While the songs on Whatever Gets You Through The Day are neither as immediate nor as repetitive as their last two albums (a relatively bold step on their part), it reaffirms the intrinsic strength of a musical territory Lighthouse Family have all but staked out while not trying anything too different. Which is exactly why it will be in the top 10 of the album chart in its first week.