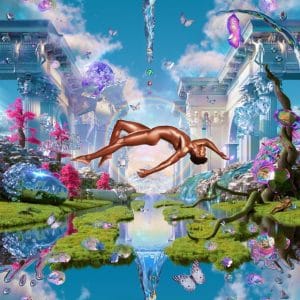 It is a remarkable sign of the times that rapper/singer Lil Nas X has made it to a debut album at all. After the brilliantly catchy genre-bending of 2019’s Old Town Road, singles like Panini and Holiday didn’t live up to expectations, and he would have fallen out of favour there and then had it not been for his online persona. Surreal, self-effacing, meme-literate, he works social media with all the skill and naturality of a Gen-Zer who was a Nicki Minaj stan for most of his teens, and thus Lil Nas X was given the space he needed to develop his sound.

The title track, one of the biggest songs of the year internationally, still sparkles with flamenco flair and lustful lyrics, complete with a very apt reference to the film Call Me By Your Name – gone are the days of Old Town Road, when his lyrics about “bull riding and boobies” led people to assume he was straight. Sun Goes Down delves deeper into this subject matter, reflecting on dark times over beautiful guitar chords (“These gay thoughts would always haunt me / I prayed God would take it from me”).

Most of the album is split between two distinct styles: the booming, clicking trap beats that characterised Old Town Road and are home to Montero’s rap features, and a pop/rock sound that artists like Olivia Rodrigo and beabadoobee have been making hay with. Scoop is a brilliant example of the former, with sweet pizzicato string arpeggios and a glitchy sound effect accompanying fiery verses from Lil Nas X and Doja Cat, and these are generally produced by the duo TakeADaytrip who have been on a roll lately. Meanwhile, Lost In The Citadel’s energetic drums and layers of electric guitar prove a perfect foil for the song’s catchy hook.

Industry Baby, the record’s most recent single, serves as a victory lap, its triumphant horns and boastful lyrics rubbing Lil Nas X’s success in the faces of anyone who thought Old Town Road was his peak. Jack Harlow’s verse follows with references to his place in the rap world, and while he’s less dynamic as a performer the collaboration still goes over nicely. Void sticks out for multiple reasons, as the longest track on an album of streaming-oriented brevity and a particularly anthemic performance. His vocal range stretches into a vulnerable, endearing falsetto, the driving beat rises and falls with the song’s emotions, and the string-laden arrangement lends it a grandeur that hasn’t been present on previous Lil Nas X material.

Life After Salem is a gritty rock-influenced tune whose lyrics allow for a dual interpretation of fame and a dysfunctional relationship (“Why don’t you just take what you want from me? / I think you should take what you want and leave / what you want from me?”) and this is followed by the melancholy Am I Dreaming, a Miley Cyrus duet that brings proceedings to a close while displaying the best vocal chemistry on the record. On a related note, it was a very good decision to include Elton John’s piano playing rather than his voice on One Of Me, as that combination would not have worked at all.

At times, the sonic whiplash from track to track is reminiscent of Ariana Grande’s Sweetener, which alternated Pharrell tunes with her existing Max Martin-led team. But whereas Sweetener came across as incoherent, Lil Nas X does a better job of straddling his two sounds. They are an expression of different moods, a refreshing sign of versatility, and the music throughout Montero suggests that Lil Nas X has a very bright future ahead of him.