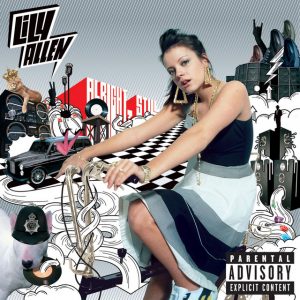 British pop music has been in a bit of a state recently. When shows like The X Factor reduce pop down to a commodity like baked beans, is it any wonder that the nation’s music lovers are turning to bands like Arctic Monkeys – bands with genuine talent who haven’t compromised their integrity, do exactly what they want to do and yet are still massively successful? If only there was such a phenomenon in the world of pop music.

Well the good news is that there is – meet Lily Allen. Her MySpace page has become the stuff of legend, notching up over two million plays in nearly six months and leading to the sort of word of mouth buzz that money can’t buy. Also home to Allen’s witty and very open blog (Edith Bowman, The Kooks and Carl Barât have all been rather viciously put down in recent months), it’s easy to see why she’s been called the ‘Poster Girl of the MySpace generation’.

Yet there’s more to Lily Allen than an internet success story. As a wise man once said, it’s all about the music. Alright, Still doesn’t just have a few potential singles, every single track could be a huge hit. It’s an album full of commercial, hook-filled pop tunes, but with enough wit and subversion to appeal to both the old and the young.

Take Allen’s very first single LDN for example. A sparklingly fresh, ska-tinged melody and a chorus of “sun is in the sky, oh why oh why would I want to be anywhere else” suggests a love song to the nation’s capital, but pay closer attention to those lyrics. Underneath the hot weather lurk pimps, crack whores and little old ladies being mugged outside supermarkets. Yet you probably won’t even notice this darker side until after about 15 plays, so catchy and effervescent is the song.

LDN is also notice that Allen has the potential to be one of this country’s great lyricists. An opening line of “riding through the city on my bike all day ‘cos the filth took away my licence” is good enough, but when she goes on to rhyme Tesco with al-fresco, you start to realise that this is a lady touched with genius.

It’s the subversive streak running a mile wide through Alright, Still that makes it such a delight to listen to. You just know that Girls Aloud would kill for a song as hilariously vicious as the ex-boyfriend baiting Not Big (“I’m going to tell the world you’re rubbish in bed, and that you’re small in the game”) if only Louis Walsh would let them. Smile may have a gorgeous reggae sound, but its lyrics tell a bittersweet tale of revenge on a ex-boyfriend – all sung in Lily’s sweet-as-honey voice.

Allen can also capture the atmosphere of a night out in modern Britain just as well as Alex Turner. Knock ‘Em Out is a gloriously funny account of being chatted up in a bar (“No, you can’t have my number, cos I lost my phone”) while Friday Night effectively conveys the horror of a night out from hell, starring characters such as the jobsworth club bouncer to the gang of aggressive girls – all set to a melody that could be The Specials‘ Ghost Town updated for the 21st century.

There’s also the beautifully poignant Little Things, and Everything’s Just Wonderful, which says more for female empowerment than any number of Spice Girls songs could ever hope to do. Only Take What You Take sounds oddly out of place, ditching the reggae/ska feel of the album for a more rocky approach. It’s still pretty good, but it pales in comparison to the rest of the album.

Although long-term Lily fans will be disappointed by the lack of some favourite demo versions (the brilliant 50 Cent skit of Nan You’re A Window Shopper sadly doesn’t make the cut due to legal issues), but this is still going to be the inescapable soundtrack to summer. Pop music needed saving and in Lily Allen we’ve found just the woman to do it.