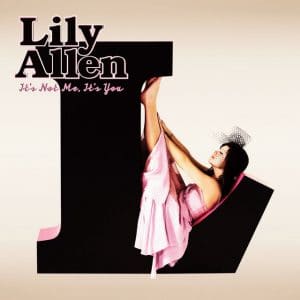 Those days of candid MySpace blogs, a leaked demo every week and musings on wanting to look like Cheryl Tweedy seem so long ago. Three whole years ago, to be precise, back when nobody cared who Lily Allen‘s dad was, or whether she really did speak with a Cockney accent or not.

In those three years Allen’s not released an album, but she’s hardly been out of the newspapers. Whether it be an ill-advised TV chat show, long-running feuds with several other pop stars, or her every relationship being unfailingly dissected by the tabloid press, she’s arguably become more celebrity than singer.

Which makes It’s Not Me It’s You a very welcome release, serving to remind us what Allen is very good at – being a pop star. Her second album is full of the ingredients which made her debut such a delight: witty lyrics, instantly memorable tunes and a wholly refreshing atmosphere.

The album also benefits from having just the one producer in the shape of The Bird & The Bee‘s Greg Kurstin. Where Alright Still had a whole mish-mash of producers and resultant sounds, It’s Not Me, It’s You shows off a consistent electro-pop approach, with Allen sounding world-weary and melancholic at times. It’s a sound that suits her.

In contrast, the song topics touch on matters as varied as drugs, relationships going wrong, relationships going right, politics, religion and most worryingly, how rubbish it is to be famous. Admittedly some shots do miss their target, particularly towards the end of the album, but Allen’s more on-form than off most of the time.

Everyone’s At It brilliantly skewers hypocrisy about drugs while refusing to condone or condemn (which has already led to some predictable shock headlines), while The Fear shows off her wordplay to its very best advantage. Although pop stars whinging about the vagaries of the music business may not be the most thrilling of subject matters, Allen gets away with it by clever puns such as “I am a weapon of massive consumption… I’ll look at the Sun and I’ll look in the Mirror…”.

Musically, she’s progressed as well. Not Fair may be a lyrical rewrite of Not Big (boyfriend is a bit crap in bed) but it’s set to a thrilling electro-bluegrass beat (yes, really) that you never become tired of hearing. Never Gonna Happen introduces an accordion before bursting into the sunniest of choruses, while Back To The Start doesn’t so much nod in the direction of Klaxons but grabs them and gives them a full-throated snog.

There’s even a cheeky swipe of The Carpenters‘ Close To You in the introduction to Fuck You, the track that was debuted on her MySpace site last year with the working title of Guess Who Batman. The lyrics may slate George Bush for his many wrong-doings (“You want to be like your father, it’s approval you’re after, well that’s not how you find it”), but with the former President now back on the Texas ranch and the Obama Era upon us, the song sounds weirdly anachronistic before it’s even been released.

Sadly, after a superb start, the album does seem to rather tail off towards the end. Those people who pilloried Kate Nash for lyrics about having a family and drinking cups of tea will have a field day with Chinese, which basically sees Allen singing a list about the things she’s got planned for the day – “we’ll get a Chinese and watch TV / tomorrow we’ll take the dog for a walk / and in the afternoon then maybe we’ll talk”, while the lyrics to Him are positively cringeworthy, musing upon whether God has ever taken crack, whether He’s financially secure and who He votes for before deciding that, mystifyingly, “His favourite band is Creedence Clearwater Revival“.

On the other hand, the stunning 22 shows a new found maturity and could well be the best thing she’s ever written – the poignant tale of an ageing party girl who finds herself on the wrong side of 30 reduced to some increasingly desperate one night stands – a distant cousin of Arctic Monkeys‘ Florescent Adolescent in fact. Who’d Have Thought also deserves a mention for the sheer chutzpah involved in blatantly rewriting the chorus to Take That‘s Shine and getting away with it.

For those people who still think Lily Allen is the epitome of nepotistic celebrity culture, her second album won’t change many minds. For the rest of us, It’s Not Me It’s You cements her position as one of this country’s most interesting pop stars and proves that she’s not some one-hit wonder.