by Laurence Day
published: 2 May 2014 in Album Reviews
Tweet 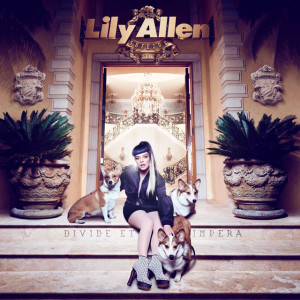 Lily Allen has always been outspoken. It’s part of her neverending charm; she’ll say what others either can’t or won’t, with blunt aplomb and an endearing smirk. For a return to the spotlight, after a familial focus, she swanned back via John Lewis’ Christmas blaze of glory and a Keane cover. Everything fell right into place – again – for arguably Britain’s most interesting and essential popstar.

The situation swiftly soured however, with Hard Out Here. A contrived sack of huffing and puffing directionless guff, it took potshots at Robin Thicke (hurrah!) and anyone in the music industry packing a schlong. Sheezus – is that supposed to make us laugh? – seemed like a less enticing prospect. But, with dogged faith and crossed fingers, still we eagerly anticipated its arrival.

Lyrically and thematically it’s a pretty atrocious gambit, which is about as positive as it’s possible to be about her intentions. URL Badman – yep, a millionaire proclaiming to be a badman (like Kele Okereke and his ‘rude boy’ obsession) seems super sincere, especially with the timely dubstep pop-rap (maybe we’ll get a chillwave number next). She also flip-flops on numerous points with callous disregard for anything more than stirring up controversy – Hard Out Here’s utterly misguided views on irony and feminism are cringeworthy, and the title track’s calling-out of every other female pop artist in a botched bid to prove why it’s “hard out here for a bitch”.

Gone are the days of being a working-class hero with tracks like Alfie, LDN, Smile and The Fear; now it’s a relentless tirade of patronising spiels for her comeback as Queen Sheezus, who appears to be the kind of royal that lauds over her serfs with an iron fist as they starve to death. In her attempts to advance social dialogue, she’s essentially become an 18th century French monarch, and we all remember how that ended. Is Silver Spoon supposed to be a joke?

When it comes to the actual music however, there are redeeming qualities. It’s well-constructed pop, at its base. There are nods to M.I.A. (Air Balloon) and Justice (L8 CMMR) scattered through her glimmering bubble-pop. If you can withstand lashings of auto-tune and a foundation built solely from plastic beats, musically, there’s something to get to grips with. Allen’s still got a knack for hooks, with the aforementioned tracks brandishing earworms like anthrax-filled Super Soakers; Hard Out Here is ruthless when it comes to burrowing into your noggin. As Long As I Got, a cajun-dance country cut, is ridiculous and grand; Insincerely Yours boasts brilliant production, a NYC funk-jazz ’90s ooze, slinking suavely through the night; and Take My Place is a highlight, a trappy synthpop doozy. It’s not all bad, not by a long shot.

It seems like if Allen had set her phasers to fun rather than this sloppy faux-femilitant ‘post-irony’ schlocky schtick, she, and us, would be getting our jollies on like drunk children. She sets up a wondrous party environment with the melodies, choruses and rhythms on Sheezus (especially on Our Time), but, for some ungodly reason, Allen would rather be the 21st century’s biggest buzzkill than do what’s she;s more than capable of and throw a shindig to rival Elton John‘s NYE bonanza. The overall feeling of Sheezus is not a million miles from a Stephen King milieu: we’re Carrie, deliriously happy being crowned prom queen, but Allen dumps pig’s blood on us, revealing the whole thing to be a hoax. Why, Lily? Why toy with our emotions like this?

Ultimately, there are some really strong pop moments on here, but they’re overshadowed by inane, inert, insignificant drama-queening of the highest degree. Who has time for that?