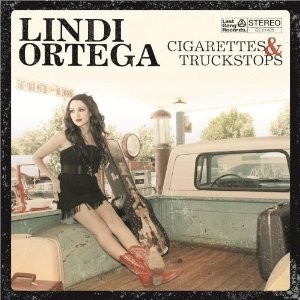 You can take the girl out of Toronto, but you can’t take the Nashville out of the girl.

If that didn’t make sense to you, neither will Lindi Ortega. Actually, it’s likely that Ortega won’t make much sense even if you did. Consider the facts: Ortega’s voice is a genuine and unique take on Dolly Parton, Stevie Nicks and Emmylou Harris, both raw and deeply warm, with a nostalgic vibrato and an agile body. Her songwriting is essentially an anachronism: her tunes play like old country cuts from the ‘60s, and the ‘50s, and often the ‘40s. She wears signature red cowboy boots, and she titled her latest LP Cigarettes & Truckstops.

Wait, what? It’d be one thing if Cigarettes & Truckstops were a contemporary country-folk album with a genuine sound (like Marcus Foster’s recent The Last House EP). And sure, recent times have seen Canadian acts cross over onto American and UK charts (see Arcade Fire and Japandroids). But how on earth did a child of Toronto, Ontario, generate a record that doesn’t sound like it was made in this era, let alone that place?

Part of it, most likely, is that Ortega moved to Nashville in 2011 to record Cigarettes & Truckstops – and the southern locale makes itself heard. The opening, title track stumbles in with a soft country shuffle, sprinkled with jangly guitars and low harmonies over Ortega’s yawning, sugary croon. On the cowboy-ballad Lead Me On, Ortega’s vibrato recalls the Southern stylings of the Carter Family (as well as some of the more country-tinged 1920s show tunes); and on the country-blues-rocker Murder Of The Crows, her backcountry accent is undeniable.

Lyrically, too, Ortega’s surroundings assert themselves. Cigarettes & Truckstops finds her boarding Greyhounds like the best of American folk singers, quoting her Mama, and (painfully enough) having ‘cigarettes and truckstops’ remind her of her man. On the same song though, Ortega spins a truly endearing play on words: “I’d rather have you still beside me than have you always running through my mind.” Within one track, she moves from railroad-gin platitudes to simple, poignant poetry – something not uncommon in the works of Parton, Nicks, and Harris.

Does a Canadian singer-songwriter in her early 30s singing American country tunes from what sounds like 50 years ago make for a great album? Not quite. Even the best of lines can’t save what must be the 20,000th time someone has referred to a sunset being like a ‘painted sky.’ But most often, Ortega is able to craft songs that are ultimately successful, thanks both to her careful, easy melodies and her lush, disarming performances. No, Lindi Ortega did not make the next great alt-country album – that would require looking forwards in addition to looking backwards – but her work on Cigarettes & Truckstops is cozy, witty, and very often satisfying.

It’s strangely fitting that Brandon Flowers of The Killers hired Ortega as a backing singer for the tour that supported his solo debut LP, Flamingo. That record found Flowers, a singer from Las Vegas, struggling to craft the genuine American country rock sound of the place he grew up in. Although she did not grow up there, on Cigarettes & Truckstops, Ortega reveals a knack for sounding like the place she moved to — making her an artist who is, if not entirely original, truly rare.