by Helen Clarke
published: 25 May 2018 in Album Reviews
Tweet 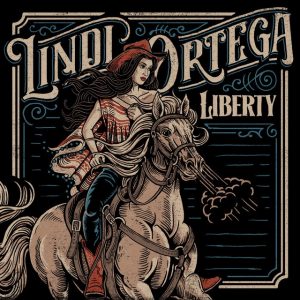 Linda Ortega is a curious artist; a sort of gothic country singer, she can belt out a tune but generally prefers her music on the gloomier side.

The Canadian-born, formerly Nashville-based singer-songwriter should be a star in the country scene; her interpretation of the genre is refreshing and relevant, but for some reason – maybe her more intense subject matter – she’s never really found her ‘home’. Lost love, depression, drinking, revenge – her songs are mischievous, at times playful and tongue-in-cheek and always offer a discreet middle finger to society. Which may be why her shows, at least on this side of the Atlantic, attract more of a punk and rockabilly crowd than a traditional country audience. But nevertheless, she persisted. Until now.

Liberty, her seventh album, feels like the record she’s been desperate to make for some time. Its sleeve features an illustrated Ortega, complete with trademark red boots, astride a horse, looking fiercely into the horizon. As far as metaphors go, it’s pretty straight forward.

Liberty is a Western tale that, from the very beginning looks to king of the Spaghetti soundtracks Ennio Morricone for more than a touch of inspiration. Opener Through The Dust Part I is a bouncing western instrumental with a gothic-twist – all woozy steel guitar twangs, galloping drums and blasts of Mariachi band.

Ortega has talked about Quentin Tarantino, her Irish mother’s collection of Dolly Parton and Willie Nelson records and songs from her Mexican father’s childhood as being key influences, and they can be felt throughout – as with the works of Calexico and Lee Hazlewood. There’s absolutely no sense of her holding back, and she fully embraces the genre, to the extent that at time it veers towards kitsch.

You Ain’t Foolin’ Me is a case in hand – a brilliantly kitschy triumph. Its subject matter is akin to that which we’re used to; its venomous stuff, but with a poppier feel to it. If Katy Perry ran away to Nashville set on revenge, you could well imagine this as her reinvention record: “You walk away, you think I can’t hear a thing you say, why don’t you say it to my face, why can’t you just be real? My dear friend, why must you insist we pretend that you don’t wish that I was dead, I know that’s how you feel.”

This is, she’s said, a concept album that sees a central character shedding the darkness of her past and emerging into the light. In reality, the story might not be the most cohesive, but the changing melodies and tempo of Liberty do feel like a journey, and those with a knowledge of Ortega’s past will find much to draw upon.

When Ortega posted her wedding photos on social media, fans wondered whether this new found stability and contentment would have an impact on her work. To an extent it has. Two songs on Liberty are very obviously written for and about her new spouse. On Pablo she sings, “…as she strummed his guitar how his fingers would dance, He sang like an angel, and it put me in a trance… The seed of love within my heart, each day it would grow for my darling Pablo”. On Lovers In Love she goes on, “Some lovers meet out in the street, they make out, move in and move out, and there’s the ones like us who can’t get enough, with you’s where I belong.” But on the whole, well, a dark streak clearly runs through her lifeblood.

The record ends on a reflective note, with Gracias a La Vida – a cover of a song by Chilean composer Violeta Parra – which translates as ‘Thank you to life’. A subtle, guitar strummed finale, at the end of which, to properly conclude this story, we like to imagine her plodding away on that horse, a flash of red boot visible on the horizon.