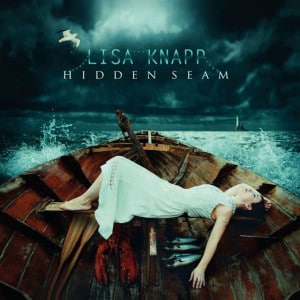 Aside from 2012 EP Hunt The Hare, it’s taken six years or so for BBC Radio 2 Folk Awards nominee Lisa Knapp to really follow her critically acclaimed debut Wild And Undaunted. That’s not to say she hasn’t been busy, mind.

In between, Knapp has toured with James Yorkston and worked with husband Gerry Diver on the Irish-inspired Speech Project, which took the rhythm and key of spoken word pieces by the likes of Shane MacGowan and Damien Dempsey and, through recording software, used them to create musical pieces. In the process, it showed how spoken word has a sort of melody and music embedded into it. It has been described as “a kind of folk minimalism on the cutting edge of folk crossover”.

Hidden Seam isn’t quite as avant-garde sounding as that. Nevertheless, some facets of and ideas explored in Speech Project have filtered into Knapp’s second album – perhaps unsurprisingly, given Diver produced the album and worked on its arrangements.

Opener Shipping Song takes the BBC Radio 4 Shipping Forecast and conveys its sleep-inducing elegance brilliantly through gentle, slow-tempoed melodies that include measured drum and electro beats, subtle acoustic guitar and a drawn out yet beautifully sung list of coastal stations. Indeed, Knapp’s vocal isn’t too dissimilar to Björk‘s at times, especially when reaching the higher notes. Come to think of it, Shipping Song wouldn’t sound out of place as a Björk track, thanks to its esoteric nature.

The title track then takes the album into this so-called folk minimalism, with the track beginning with repetitive, flute-sounding melodies verging on Philip Glass like, before being subtly transposed onto violin. This gradual build-up eventually leads into something quite bold, especially when drums arrive and Knapp begins, from the sound of it, to speak in tongues and enter into a type of breathless incantation. As a title, Hidden Seam is quite appropriate here, suggesting something lurking beneath the predictable and recurrent.

Black Horse sees Knapp set alongside Yorkston, with their intense vocals entwining and weaving into one another. This, along with its lyrics (“You ride the black horse and I’ll ride the white, mine is the day time and yours is the night”) and pounding drums produce something at the more traditional end of folk. Yet this makes the last minute or so all the more surprising, as this fades away to leave you with a tender, almost lo-fi sounding outro with soft, hissing, sparse piano accompanying Knapp and Marry Waterson as they repeat lyrics with a deep emotional delicacy. Again, this represents something hidden and unexpected beneath.

Seagiver links back to Shipping Song well not only because of its link with the seas, but it again has that obvious Björk tint to it – perhaps more so thanks to its sweeping arrangements and grand sound. Yet Knapp’s vocal shines particularly here, reaching impressive heights and complementing the arrangements beautifully. It’s a testament to Diver’s arrangement ability.

Album closer Hushabye again offers a link to opener Shipping Song, in turn bookending the album well, by reciting bits of the shipping forecast again (“Rockall, occasional rain but mainly fair, slight or moderate”) and offering a lullaby-like aspect through its lyrics (“Hushabye baby, hushabye love, rest to the fading light of the sun”) and pedal steel guitar. A fitting and rather lovely closer.

The pleasing subtleties and twists in Hidden Seam, coupled with Diver’s skilful production and Knapp’s huge talent, have produced a beautiful follow-up here. Ardent folk and Knapp fans will feel it’s been worth the wait – and will hope the third album doesn’t take as long to follow.