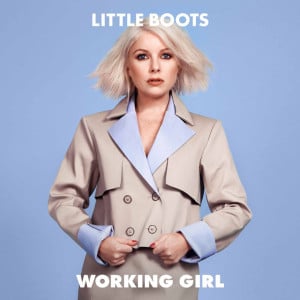 It’s not quite worked out as planned for Victoria Hesketh aka Little Boots since the heady days of 2009. Back then, she was the winner of the BBC’s Sound of 2009 poll, beating the likes of Lady Gaga, La Roux and Florence & The Machine, she released a series of singles that sounded like instant pop classics (Stuck On Repeat, New In Town and Remedy), and the future looked bright on the release of her debut album Hands.

Her follow-up, the Tim Goldsworthy-produced Nocturnes, despite having its moments, didn’t quite replicate its predecessor’s success, and Hesketh suddenly seemed swallowed up by the myriad of electro-pop competitors that she’d ironically helped swarm. A rethink was called for, and Working Girl certainly seems like the beginning of a new era for Little Boots: from the power-dressing figure of Hesketh on the cover, to the introductory skit extolling the listeners to “make something happen”, this feels like a brand new start.

The music contained in Working Girl won’t come as much of a shock though – as on Hesketh’s last two albums, this is skillfully crafted electro-pop, at times as poppy and accessible of the likes of Kylie Minogue or Madonna at their best, at others as dark and melancholic as Lykke Li. The excellent Taste It is an early standout track: sleek, sexy and blessed with a nagging chorus that stays in the brain for days afterwards, and the dark disco anthem of No Pressure shows off Hesketh’s voice to its very best. Even better is Help Too, a lushly arranged ballad containing some of her most personal lyrics to date.

Working Girl is not an album without its flaws though – there are only 11 tracks (and two little interludes which last less than a minute each) but it seems a lot longer somehow. And for every sparkling pop gem, there seems to be another filler track – Real Girl, The Game and Heroine all fall a bit flat, and while not being particularly bad songs, just sound like something that Xenomania would knock off in their sleep.

When it’s on form though, Working Girl proves that Hesketh can still write some great, great pop songs – Get Things Done is reminscent of Girls Aloud at their very best, and Better In The Morning makes for an excellent closer, a tongue in cheek ode to the ‘walk of shame’ that employs some very effective Tom Tom Club-style percussion. The latter, incidentally, is produced by Aerial Rechtshaid, the Vampire Weekend producer giving Hesketh the kind of sleek shine that bodes well if they decide to work together in the future.

Working Girl isn’t an album that will stretch boundaries or break new ground – the best tracks are ones that can’t easily be compared to other artists, such as Taste It and Help Too. It’s an album that puts her firmly back on the musical map though, and there are plenty of tracks on here that would suit the soundtrack to many a summer barbecue. It’s nice to have her back.