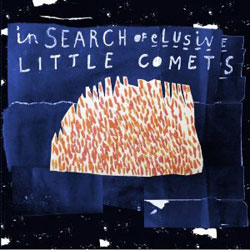 This album has been in the administrative pipeline for a little while. Little Comets signed with Columbia back in 2008, and debut single One Night In October was unveiled to the world almost two years ago.

It would seem, however, that the Tyneside-Wearside four-piece found little comfort in the Columbia stable: band and label parted company in acrimonious style in early 2010, Little Comets commenting that this, their debut LP, was eventually released to them because “it didn’t sound enough like Ke$ha“. You’d be forgiven for thinking that such a quality is a virtue rather than a vice.

With In Search Of Elusive Little Comets, the wait for the elusive Little Comets LP has reached its belated conclusion – no more guerrilla gigs on the Metro or in the bakery aisle at Marks & Spencer, you’d expect�- and all that’s left to figure out is whether or not good things really do come to those who wait.

That wait, as it turns out, ends immediately: the album launches into a triforce of singles, past and present. Adultery, a 2009 effort, hits the ground running with terrific shorn chords, resolute wails and a slender-yet-driven constitution; One Night In October, the band’s first ever release, takes the baton and lunges forward into a cacophony worthy of cited influence Paul Simon; current single Joanna draws a line under the LP’s opening�assault with an indie anthem as distinctive and infectious as any Futureheads cut.

Little Comets, though, are careful not to come across as one-trick, and such pulse-quickening subsides in the face of the tender, measured and stripped back Her Black Eyes; the perfect foil for Robert Coles’ on-the-very-verge-of-cracking tortured delivery, which cuts through the ether like an irresistible call to arms.

Isles, too – another former single, in case you were wondering – adds another string to the Little Comets bow with a crunching, world-weary cry, while Darling Alistair reveals a poetic politic worthy of any discerning ear.

It is in the album’s second-half, however, that the band really break from radio-friendly unit shifters, an achievement that is the result of their “kitchen sink” approach, with influences ranging from Debussy and Roald Dahl to the aforementioned Simon.

Tricolour pours forth with glorious savannah chords, a rousing chorus and an echoing, almost tribal wail reminiscent of the kwassa kwassa styling so successfully adopted by Vampire Weekend, while Dancing Song takes the same formula to its careering, care-free conclusion and Mathilda sounds like an altogether more cheerful Razorlight with a new-found penchant for exotic, schizophrenic percussion.

Drawing to a close with mournful piano lament Intelligent Animals – at four minutes, including a disheartening summary of troubles in Darfur, the album’s longest track – In Search Of Elusive Little Comets is a lean, provocative and utterly enjoyable statement of intent, and belated confirmation that Little Comets, having proven their ability to defy pigeonholing by deftly handling a multitude of diverse musical elements and influences, are a genuine proposition to behold.