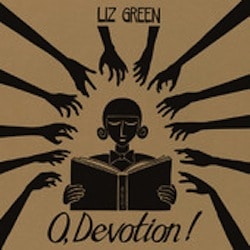 Liz Green’s debut album has been a long time coming. The Wirral-born, Manchester-based singer first made some big waves in 2007 after her double A-side single Bad Medicine/French Singer was released.

The eerie mix of blues and jazz, sounding for all the world like they were recorded sometime in the ’30s, caused quite a splash, and it wasn’t long before Green was tipped as one to watch. Yet then, for four long years, silence pretty much reigned.

At last though, we have Green’s debut album O Devotion! – it seems she possesses a particularly strong perfectionist streak and toiled endlessly to recreate the songs in the studio to sound exactly like they had in her head. Thankfully, producer Liam Watson has proved to be a perfect foil, and has helped to shape these 11 songs in a very memorable way.

For O Devotion! is a truly remarkable listen. For a start, there’s Green’s voice – part Edith Piaf, part Bessie Smith with a healthy dose of Antony Hegarty thrown in. It’s a strange, other-worldy vocal which grabs the attention from the get-go.

Yet what’s truly special about this album is the way that Green’s distinctive voice is married to the equally distinctive arrangements on display. Stark acoustic guitars mix in perfectly with parping brass, giving tracks like the brilliant Displacement Song an almost Brecht/Weill tone to them.

Her lyrics too are a class above the norm. The aforementioned Displacement Song concerns the Italian chemist and Auschwitz survivor Primo Levi and paints a haunting picture of its subject (“here they come in their two and their threes, their guns to the front so you can’t fail to see”). The gently lilting New Orleans-style brass underpinning the song just adds to the sense of compelling unease.

There are also re-recordings of previous singles Bad Medicine, French Singer and Midnight Blues. The latter is particularly good, almost skipping along as Green describes a night which is “gonna be a whole lot of fun tonight” despite sounding anything but. The re-recording of French Singer is nothing short of extraordinary – just Green and a piano, conjuring up the spirit of Edith Piaf and sounding for all the world like she could be one of her contemporaries.

Green also seems to be able to draw on a deep well of sadness with her marvellously expressive voice. Just the mournful intonation of “I’ll take the quiet, I’ll take the winter, I’ll take the cold” is enough to break the hardest of hearts, while the closing Gallows is as bleak as the title may suggest, with an anguished cry of “I always knew you’d bring me down” before going on to borrow from the macabre children’s nursery rhyme Oranges & Lemons.

The pace may not vary too much, but in this age where the tide of female singer/songwriters is becoming ever more strong, you need something truly special and memorable to stand out from the crowd. Liz Green has that something special in abundance and O Devotion! is a truly special album.