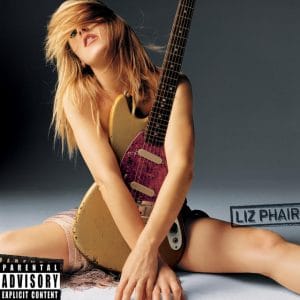 Liz Phair‘s Exile In Guysville was acclaimed as one of the all-time great debuts on its release in 1993. The sprawling, ambitious epic, recorded in a garage before the days when lo-fi was fashionable, showcased songs that were catchy, funny and sad, and displayed refreshingly frank attitudes to sex (a sample lyric being, “I want to be your blow job queen”). It seemed as if Phair could do no wrong.

Fast forward 10 years and Phair’s self-titled fourth album has been released to some stingingly vitriolic reviews on the other side of the Atlantic. The main reason for this seems to be that Phair has teamed up with The Matrix, the hit making team responsible for self-styled “pop-punk princess” Avril Lavigne, who produce four songs here.

While some of the advance word may have been over the top, it’s undeniable that this is a crushing disappointment after five years’ wait. While it’s by far the most commercial thing she’s ever done, the quirkiness of Phair’s early material seems to have been lost forever. She’s obviously going hell for leather for chart success now, especially judging by the FHM-style pose of the cover.

However, while all artists move on and nobody should expect Guysville Pt 2, a songwriter of Phair’s talent can and should do a lot better than some of the generic pop that’s on offer here. The opening single Why Can’t I, while being infuriatingly infectious, is a note-by-note remake of Lavigne’s Complicated, and tracks such as Take A Look are dreary to say the least.

However, underneath the glossy production values, there are glimpses of the old Phair. Little Digger is a genuinely touching message to her son about her new boyfriends; Friend Of Mine is a beautiful analysis of her divorce; and Extraordinary boasts a huge, life-affirming chorus. HWC, meanwhile, is that rare thing: a genuinely subversive pop song. It’s difficult not to sing along with the chorus, which could prove embarrassing in the bus queue as it goes, “Give me your hot white come.”

If there’s one thing about this album, though, to make a Liz Phair fan shudder in horror, it’s the lyrics. Her previous albums all had a real edge about them, and you could always rely on Phair to write lyrics like nobody else. Here though, with the exception of HWC, it’s a different story.

Nowhere is this more embarrassingly displayed than in Rock Me, an ode to younger men. Phair declares that she wants to,”Sit on your floor and play X Box,” before berating her suitor for his record collection with the line, “You don’t even know who Liz Phair is.” Well, that’s what happens when you take five years to make a record, Liz. The song ends with, “I’m starting to believe that young guys rule,” although it’s unlikely that most listeners will make it that far.

While nobody is denying Phair her long overdue commercial success, it’s a shame that she seems to have sold her soul to obtain it (compare with the White Stripes, for example). If this had been released by somebody like Lavigne or Michelle Branch it would have been welcomed as a nice, little, left-field pop album. However, when the genius that is Liz Phair takes five years to produce something this sub-standard, it’s enough to make you weep.