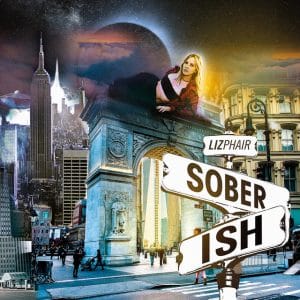 ‘Whatever happened to Liz Phair?’ is one of those questions that occasionally arises. For Phair should have been one of music’s biggest stars, had her career taken a different path. Her 1993 debut, Exile In Guyville, was one of the all-time great records, designed as a song-by-song reply to The Rolling Stones‘ Exile On Main Street.

Guyville set the template for many a female indie singer/songwriter through the ’90s, but Phair has experienced the law of diminishing returns since that debut. Her last album was 2010’s Funstyle, an odd little curio that seemed to sink without trace, and since then she’s spent her time composing TV soundtracks and writing her memoir, Horror Stories.

The 25th anniversary of Exile In Guyville seemed to creatively rejuvenate Phair somewhat. It led to a reunion with Ben Wood, who produced her first three albums, and those sessions led to Soberish, her first album in 11 years.

Soberish is neither a return to Phair’s lo-fi roots, nor is it the power-pop that marked her earlier albums. Instead, it’s a beguiling mix of the two, and a largely successful one at that. While it doesn’t quite hit the heights of Exile, it still serves as a reminder as to what a good songwriter she can be.

Hey Lou is an early standout, where Phair imagines herself as Laurie Anderson, talking to her late husband Lou Reed and trying to persuade him out of an alcoholic funk. “No-one knows what to think, when you’re acting like an asshole, spilling all the drinks, talking shit about Warhol again,” runs one typically acerbic line.

Bad Kitty continues her reputation for frankness about all things sexual, even if an opening line like “my pussy is a big dumb cat” can come across a bit awkward. In Here is a honest examination of looking for love in your ’50s, and is set to one of the most gorgeous melodies she’s ever written while Good Side really does recall her earlier albums, aa strutting anthem about ending a relationship on the best possible terms, with a typically attention-grabbing opening line (“There are so many ways to fuck up a life, I’ve tried to be original”).

Wood shows just what a good collaborator he is with Phair throughout – this is the most comfortable she’s sounded on an album since Whitechocolatespaceegg. The little ‘woo-hoo’s on Dosage, the spooky, hypnotic arrangement of Soul Sucker and the ode to Phair’s hometown of Chicago in Sheridan Road – all of those moments are good reminders of just how well Phair and Wood work together.

Nearly 30 years on from her debut, it’s clear just how influential Liz Phair is. You can hear traces of her voice in artists like Phoebe Bridgers, Soccer Mommy and even newcomer du jour Olivia Rodrigo. Soberish marks the welcome return of an artist at last comfortable with her legacy and ready to celebrate it.