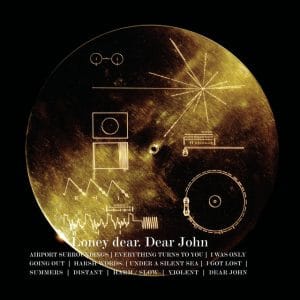 Emil Svanängen, that’s Loney Dear to you, hit the scene a few of years back when twee, Scandinavian indie folk was all the rage. The love for the xylophone and cutsie chorus has died down a little, mainly due to all the artists jumping on the ‘let’s do something completely different’ bandwagon. And so Loney Dear joins them and releases Dear John, a hybrid of folkiness, electro and melodies that wouldn’t be out of place on the west end stage.

It’s strange – the production is something completely different to what us folkies are used to, but it’s still charming in a very Loney Dear way. He has his catchy melodies, his la-la-la chorus and still retains a certain sweetness and innocence that was almost his trademark in the early days.

But this album is full of strange little synths and ’80s wonders, like the Knight Rider-esque strings in opening track Airport Surroundings, which are as synthetic as supernoodles and the underlying beat of Everything To You, sounding uncannily like the Atonement soundtrack – clickety click – creating a pace like running from zombies.

Things calm a bit in I Was Only Going Out, a pretty number with soothing, love sick lyrics and percussion featuring a vague African influence; its whistled finale returning the sound of Sweden missing until now.

There are definite up moments in Dear John, but the odd mix of Svanängen’s meandering melodies and melancholic vocals mixed with the bizarre samples and synths makes for a concoction that will either be adored or thrown out of a window in disgust.

Some moments, like Harsh Words, uses a song that seems to have been penned for an 1988 Eurovision entry, building to a cringy climax that’s not unpleasant, but a little embarrassing, and don’t even get me stated on the awful ravey screeches behind Under A Silent Sea, like some kind of Helter Skelter remix (who can forget those mid-’90s days!).

But then there’s the simplicity of I get Lost and Svanängen’s sweet voice clear as a sunny winter’s day; its a woody lone violin bringing with it a foresty atmosphere – ambient and sweet, although a little bit Lord Of The Rings soundtrack by the end.

Summers has an essence of Saturday Waits, but doesn’t reach its peak of catchiness and again, the strange, dated electro accompaniment is difficult to see through. It’s almost as if The Never Ending Story has returned with a quirkier Limahl and a trendier following.

Distant brings back some beauty, but fails to live up to expectation, even with its gothic horror choir and again choosing to end with an overused and clichéd climactic finish. However, it is the start of the best bit of the album, the pretty, yet scarily titled Harm and Violent before ending with title track Dear John, probably the best of the lot, even with its horrid toy drum rolls. The one eyed Dear John may be king here, but he’s still weird, creepy and best left alone.