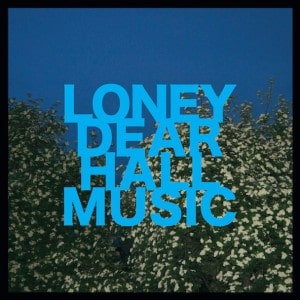 “I want your name, I want your name next to mine.” This central sentiment of love and devotion is key to what makes Loney Dear – the project of Sweden’s Emil Svanängen – so affecting. And on his sixth album, Hall Music, Svanängen has expanded the Loney Dear palette with full orchestrations in place of his usual barebones guitar and quiet synth arrangements.

Svanängen’s voice is still at the centre of it all, and his fragile, earnest performance is something to applaud (even when it’s coupled with such obviously intentional heartbreakers like “I woke up, crying in my sleep,” as in the stirring My Heart). And, for the most part, the swirling strings, stabbing brass, double bass, and clanging cymbals push Loney Dear’s music into a new stratosphere of emotional intensity. But you also occasionally get the sense that Svanängen is unduly cloaked behind such machinations, that the simplicity of his past releases is a more comfortable approach than this larger, more cinematic sound.

But, it’s also obvious that Svanängen has grown as an artist over the course of his career, and that this new breadth and depth are simply organic and natural shifts in his sound. Certainly, Loney Dear’s previous releases have got their place – 2009’s Dear John among them – and, certainly, Hall Music occasionally pales under the weight of its ambition. But, the orchestrations also perform a new and unfamiliar trick on Loney Dear’s music; it’s as if these sounds have been in Svanängen’s head all along, and he’s tried to convey them as best he could, only now he’s got all the right players on retainer to flesh out the sound the way he’s always wanted to.

A song like Calm Down – all slow building, winsome vocals (“There’s nothing after you,” and “Will you catch, catch, catch me if I fall, fall, fall?”), and pounding percussion, ratcheting the intensity until the release of a loose, fluttering, melodic vibraphone solo – is undeniably beautiful. Last Night I Dreamed About You marches through its loose, confessional narrative in choral fashion, and its scale indicates something infinite and dreamlike. Loney Blues and Young Hearts are studies in ethereal beauty Svanängen’s quiet voice a commanding presence, if only because it is so at odds with its surroundings.

On first listen, Hall Music seems merely an inoffensive way to spend a half hour or so, there but not quite, background music that misses the mark. But it’s also an album that builds, that takes root in the heart, and sweeps across the listener in waves. It’s the sort of album that makes you want to lay down between the speakers and close your eyes; it’s an album in which to get swept up.