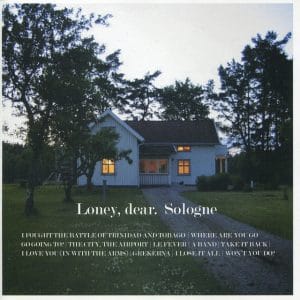 Ethos is such an important thing in pop music, and what is defining the current wave of epic Swedish sounds for UK indie kids is an amazingly consistent integrity. At the North of the Nordic compass there’s the wide-eyed shimmer of I’m From Barcelona; to the right the filmic grace of Peter, Bjorn and John and The Concretes; to the left the crazy sounds of Love Is All and The Knife; and in between and all around a teeming vortex of bands distinguished by the variegated garb of creative liberation.

Proving that the quality of standing-out is never bestowed by over-active egos, this is a movement of the truest rebellion, in which Emil Svanängen (aka Loney Dear) falls in somewhere indistinct on the compass, a place undefined, yet distinguished by inspired light and sunny melancholia, a place that exists within and outside the lines with no claim to greatness, yet holding greatness within, just like the all the best indie music you’ve ever heard, brave and resolute.

Trinidad and Tobago opens Emil’s fifth album with a kind of anti-intent that wraps itself around you and won’t let go till you’ve forgotten this is the era of Personal Empires and MySpace. The fact that it’s his fifth album initially amazes you. But then you remember that hey, this is what he does, and in Sweden the kids have the guts to go through with it and what the heck. Two albums a year would be frowned upon by Razorlight and Stereophonics, but really, why not, if that’s what you do.

The government of Sweden of course subsidises its indie kids, therefore encouraging them to be just that. But boy, do they pull it off, in what seems to us right now to be near unison. Older heads have observed how this epic migration harks back to the days of true UK indie, before it was hijacked by careerists who saw pots of gold on the other side, and indeed the freshness and originality of the current sounds point to an era before the term “mainstream alternative” was coined. The likes of the Barcelona crew and Suburban Kids With Biblical Names, along with two of the heads of the most influential Swedish labels, Labrador and Hybrism, have stated that they’re primarily inspired by the heyday of British indie, acts like The Velvet Underground and Fire Engines, labels like Rough Trade and Sarah, and it’s a brilliantly self-evident fact when you listen to any of the records.

Of course it’s not that Britain today hasn’t got its answers to the Swedish invasion and the credit lies totally at the feet of subsidors, it’s just that an obscurity has been created for our best acts that’s pushed them even further out in alternative waters. The route to mainstream acclaim is all but barred. And, in reflection, just who are Sweden’s Coldplay or U2? It certainly can’t be The Hives.

Maybe it’s the melancholy of Sologne that makes me lament on such matters, but Emil soundtracks my reflections with a braveness in solitude that’s an absolute inspiration. Past the opening song, the album is a lightly profound event that, having broken you down like a skilled analyst and made you face your self-loathing and political bitterness, takes you through its undulating landscapes till you emerge at the other end as if from a night of dreamless sleep.

Like Kid A wrapped in affectionate layers of melodious pop warmth and wonder, jagged edges turned towards the sun, Sologne doesn’t so much as hit you where it hurts but takes you, eventually, to where you smile, a place where there’s no Zane Lowe in sight, and your local assembly hand out banjuleles with luminous socks.