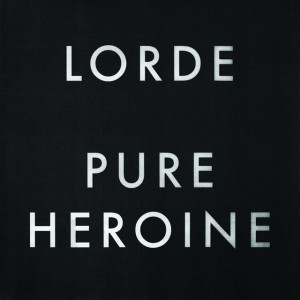 “Don’t you think that it’s boring how people talk?” runs the opening line of Lorde‘s debut album. And talk is what an awful lot of people have done about this 16 year old New Zealander who was signed to her record label aged 12 and projects star quality as brightly as she does world-weary ennui. And with a Number 1 single in the US, a well-documented Twitter spat with Miley Cyrus fans, and some verbal sideswipes at the likes of Taylor Swift and Selena Gomez, it’s a fair guarantee that people are going to talk for some time.

Thankfully, there’s substance behind the hype. Pure Heroine is a beguiling listen, and at times a genuinely impressive one. Lana Del Rey will be a frequent comparison – there’s the same languid delivery, the same dramatic orchestral arrangements and frequently recurring lyrical motifs (while Lana seemingly has an obsession with bad boys and red dresses, Lorde sings an awful lot about teeth, for some reason). Yet while Born To Die was an enchanting yet ultimately shallow diversion, there does seem to be actual substance to Pure Heroine.

Much of the album’s charm is due to Lorde’s personality – a slightly aloof, eye-rolling presence, but one who can articulate the doubts and insecurities of a teenager beautifully. Royals is startling enough in its put-down of the celebrity lifestyle (“everyone’s like Cristal, Maybach, diamonds on your timepiece, jet planes, islands, tigers on a gold leash, we don’t care”), but it’s the wonderfully aloof delivery of lines like “I’m kinda over getting told to throw my hands up in the air – so there” on the terrific Team that really sticks in the mind.

There’s a mysterious, deeply melancholy air to much of Pure Heroine, with only the superb album stand-out of Ribs really rising above a trot. Tennis Court, the other song that pushed Lorde to worldwide attention, ramps up the Del Rey comparisons again but springs to life with a chorus that’s impossible not to sing along to. White Teeth Teens tells of alienation within a peer group – “I’ll let you in to something big, I’m not a white teeth teen, I tried to join, but never did”. The message is clear: she’s the brooding, glowering alternative to the twerkers, the Veronica Sawyer to the identikit parade of Heathers.

It’s the aforementioned Ribs that most excites though – a pulsating, soaring pop masterpiece in which the impossibly young Lorde manages to sing “it drives you crazy getting old” and gets away with it. There’s something almost ridiculously poignant hearing lines about reminiscing about childhood friends “sharing beds like little kids…laughing till our ribs get sore” and then following it with the longing delivery of “I want it back”. There’s also a lyrical namedrop of Broken Social Scene‘s Lovers Spit, just to cement its status as one of the year’s coolest songs.

It’s not a perfect album: it’s very much front-loaded, with Royals, Tennis Court and Ribs all popping up in the first half of the record, and by the time Glory And Gore and Still Sane roll around, the template’s starting to sound a bit tired. The sheer speed of Lorde’s rise also has to alarm slightly – if someone can appear so quickly, it seems sadly inevitable that they could disappear equally fast. There is, however, so much talent on display that fears of Lorde being a flash in the pan can surely be discounted.

Not that she should care anyway. This is a remarkable debut that fairly sizzles with confidence and attitude. As Lorde herself says in the final line of the last song A World Alone (and in a neat nod to that opening line of Tennis Court), “people are talking, people are talking…let them talk”. It’s a good mindset to have, for people won’t be able to stop talking about Pure Heroine for some time to come. Where she goes from here is an intriguing thing to ponder.