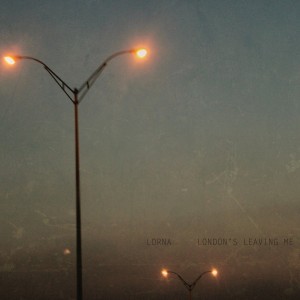 If the British government really wants to incentivise people to get married, then they might find the music of Lorna acts as a more effective encouragement than any tax credit. London’s Leaving Me is the fifth album by Lorna, a Nottingham-based sextet whose two singers are a wife and her husband: Sharon Cohen-Wolfe and Mark Rolfe. The music they make together exudes intimacy and contentment; across the album’s nine tracks, Sharon and Mark’s vocals weave together in beatific, breathy union that – rightly or wrongly – indicates domestic bliss.

Such is the breathy nature of those vocals, it’s often hard to pick out the album’s words. The title of album opener Like Alastair Sim refers to the late British character actor, but it’s hard to know precisely to what he’s being compared. No matter: the track is a cornucopia of loveliness, comprising chiming guitar and a lush, swelling string arrangement. Similarly, the next song, Wayne Mills, may or may not be about the murdered country star, but the song’s abundant prettiness – scuffed up ever so slightly by some fuzzy electric guitar – means any lyrical darkness remains elusive.

The rest of London’s Leaving Me passes by in a similar fashion. There are, however, three slight curveballs. Smothered In Hugs is a cover of a track from Guided By Voices’ classic Bee Thousand album. It’s testament to Lorna’s mastery of their sound that it doesn’t sound at all anomalous, as the original’s lo-fi fuzziness is traded for Lorna’s trademark twinkling sound. Bigger Than Sound (And Greater Than Us) opens with a looped string refrain that recalls the late, lamented Swedish act Air France. (It also presents the tantalising prospect of Lorna dabbling in trip-hop.) The title track, meanwhile – with its insistent bassline and snare drum – sounds like Motörhead in comparison with the rest of the album.

There’s not a bad track here, but it’s hard to know what a bad Lorna track would sound like, such is the unyielding pleasantness of their sound. With their aversion to volume and adeptness and knack for writing bittersweet songs, Lorna’s closest musical antecedents are Isobel Campbell-era Belle and Sebastian, Camera Obscura and Saint Etienne. (‘London’s Leaving Me’ is a very Saint Etienne-esque title.) Yet on this evidence, Lorna lack those bands’ ability to write memorable hooks. London’s Leaving Me is a lovely listen, but also a forgettable one.