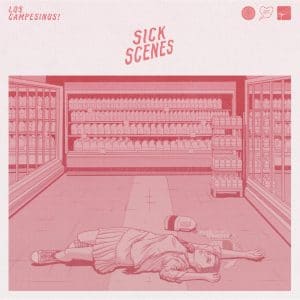 The music industry can be a tricky place to navigate at times. It has become increasingly fickle over the years as labels throw support behind bands in the hope of them becoming the next big thing, only to drop them when success doesn’t come immediately. This business approach is ruthless in the extreme and constantly tests the resolve of those who are wrapped up in it, as the members of Los Campesinos! can testify.

While the Welsh seven-piece have been able to forge a career longer than most – it is almost 10 years since they announced themselves on the indie pop scene with their 2008 debut Hold On Now, Youngster – they almost became the most recent casualties of the music industry. Following issues with management and labels, they were forced to take their longest break from releasing material.

It has been a frustrating period for the band, especially as the enforced lay-off came off the back of their very well-received fifth LP, No Blues, back in 2013. Thankfully, though, Los Campesinos! have a fan base that has remained constant throughout their trials and tribulations and they helped the band self-fund their latest effort, Sick Scenes, by purchasing special football shirts released to celebrate the band’s 10th anniversary.

That a band who have released five albums to varying degrees of success had to resort to such measures says more about the reality of the music industry than anything else, but the experience appears to have had a positive effect on Los Campesinos! if Sick Scenes is anything to go by. The record sees them release their pent-up anger across 11 songs that embrace the band’s enthusiasm to get back to doing what they do best.

It gets off to a fast and furious start thanks to the driving hook of opener Renato Dall’Ara (2008), which is bound to quickly become a fan favourite due to its self-depreciating humour and infectious chorus. “He took a hobby as a PCSO/ let me level this as an indictment/ only a part-time grass but a full-time asshole,” sings frontman Gareth David, as he demonstrates his fondness for witty lyrics has not diminished.

The crashing drums and muscular riff of Sad Suppers – which has a touch of fellow indie pop act The Wombats about it – continues the frantic start to Sick Scenes, while I Broke Up Amarante actually accelerates the pace as David vocalises the band’s recent troubles: “It seems unfair to try your best but feel the worst.” However, despite first impressions suggesting otherwise, the early intensity is balanced with some somber moments.

One such example is The Fall Of Home, which is swarming in nostalgic vibes as David sings about those who feel alienated from their hometown over a quiet acoustic melody, while penultimate track A Litany/ Heart Swells is a beautifully melancholic tale of everyday images like fruit machines and chicken shops. Yet neither of these reach the heights of album highlight A Slow, Slow Death, which is the triumphant centrepiece of the record.

Elsewhere, Los Campesinos! address the current political climate and, more specifically, the EU referendum on single 5 Flucloxacillin (“They say if they had got the victory/ they’d act with so much more humility”). It’s the sort of visceral reaction that could come off as hackneyed, but David delivers it with impressive nuance. The same cannot be said for For Whom The Belly Tolls, though, which is one of the weaker efforts on Sick Scenes.

All things considered, it’s great to have Los Campesinos! back. Not everything on their sixth effort hits the mark – Here’s To The Forth Time! is another that falls flat during the more variable second half – but when it’s good, it’s very good. Few bands are able to translate the full spectrum of emotions into song as well as the Welsh outfit and now they have established their independence, hopefully Sick Scenes will represent the beginning of an exciting new chapter in their career.