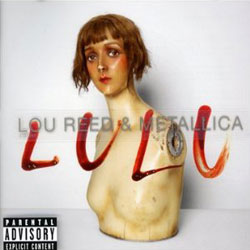 Having collaborated on a version of Sweet Jane at the Rock and Roll Hall Of Fame back in 2009, the idea of a more committed association between Metallica and Lou Reed has resulted in this, an album based on the plays of Frank Wedekind. The plays, Erdgeist and Die Büchse der Pandora (collectively known as Lulu) concern a social climbing dancer who has relationships with wealthy men and eventually falls into ruin before meeting her end at the hands of Jack The Ripper.

It’s typical fare for Reed in that he’s touched on similar themes of deprivation on his album Berlin and has attempted to fuse art and music for the entirety of his career. For Metallica’s part, they’ve never really aspired to such lofty ambitions thematically, but they have attempted to explore new avenues at various points in their career. The move away from Thrash with the Black Album was a brave move at the time while the decision to record with a symphony orchestra was inspired in its conception, if not execution.

Lulu could so easily have been a success. Reed’s tendency to try anything just because he fancies it (see Metal Machine Music or the ranting of Live: Take No Prisoners) could have rubbed off on Metallica, just as Metallica’s primal riffing could have inspired Reed to new heights. As it is, Lulu is, for the most part, the sound of the unstoppable force of Metallica hitting the sardonic wall of Lou Reed and bouncing off, each of them unaffected by the other.

Perhaps the most disappointing thing about Lulu is that both parties often sound as if they’re operating entirely independently of each other. There are times when Reed’s spoken word sits so uncomfortably with Metallica’s riffing that it’s possible to imagine the phone call between Lars Ulrich and Reed consisted of Reed asking: “Hi Lars, do you have about 12 riffs I can use, and can you play them for about eight minutes on continuous loop? No, it doesn’t matter what they are, I’ll just talk on them.”

For example, The View finds Metallica laying down a slow groove similar to that found on Sad But True before roaring off into a disjointed chorus that involves James Hetfield screaming “I am the table”. Reed meanwhile spits out clunky poetry, seldom making any sense and seeming to care little for anything his backing band are doing. This is a problem for many of the songs here, Reed indulging in poor metaphors (Little Dogs is as painful as Hetfield’s new persona as occasional furniture) as Metallica provide leaden riffs that rarely develop and evolve. Iced Honey is an endless cycle of a basic chord progression with horrific backing vocals from Hetfield, while Cheat On Me starts as a promising soundscape before developing into a creeping dirge that runs out of ideas at the midpoint.

Yet there are moments of genuine brilliance on show that hint at what might have been. As Lulu progresses, the better it gets. Frustration lays down a meaty riff and drifts into an unsettling soundscape, as Reed finally starts to put some feeling into his performance. They save the best for last with Dragon and Junior Dad. Dragon might start off poorly with random guitar feedback and a gibbering Reed, but as soon as the main riff kicks everything starts to make sense. The repetitive riffing and forceful drumming harks back to the Metallica classic Orion and for the first time in quite a while they actually sound wilfully aggressive and invigorated – as if their guard is finally down. Even Reed gets caught up in the onslaught and wakes from his slumber to turn in a decent, almost frenzied performance.

Junior Dad wraps Lulu up, and is far and away the best thing on the album. A gentle guitar pattern coupled with swelling strings is laden with emotion while Reed finally finds his voice and place within the music. The John Cale-esque strings are wonderfully pitched, and provide an undulating soundscape for Loutallica to work with. The drone that they provide for the closing moments is beautiful and wonderful to get lost in.

Lulu will have its detractors, of that there is no doubt, but it isn’t as bad as many are making out. Certainly it falls well short of what could have been hoped for, but there are moments when the collaboration bears fruit. This is not career ending folly; if anything, Reed and Metallica should be saluted for at least trying something different. Lulu might not be anywhere near the likes of Berlin or Master Of Puppets, but nor is it Christopher Lee’s Charlemagne. Given a few years, it’s probably a fair bet to suggest this might well become a cult classic.