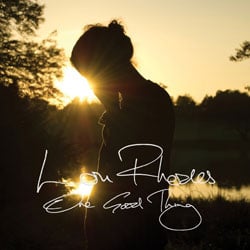 For a brief period in the late ’90s you couldn’t move for the sound of Lou Rhodes’ voice. Lamb‘s track Gorecki was a chill-out anthem for the dance kids of the day, and hugely popular with ad agencies. Despite some adventurous forays into inventive electro realms, Rhodes and her bandmate Andy Barlow would forever be associated with that one song.

When Lamb disbanded, Rhodes ditched the electronica and has since released two albums of well-received pastoral folk, the first of which was shortlisted for the 2006 Mercury Music Prize. One Good Thing is more of the same, incredibly intimate, introspective and emotional.

“Every day the news is telling of crisis and war, all I know is what they’re selling I ain’t buying no more,” sings Rhodes in a steely falsetto at the album’s opening, and the sentiment that the world is quite rubbish pervades from there on. Even though this line is suffixed with the idea that all it takes is one good thing to set it right, this optimism seems a little forced.

There For The Taking and The More I Run are beautiful ballads of guitar and breathy vocals that sound as though they are being whispered into the listener’s ear. With repeated plucked guitar refrains and intermittent string embellishment, Rhodes wears her Nick Drake inspiration in plain view.

The simplicity of the musical arrangements allow Rhodes’ beautiful vocals to shine. And they’re raw, recorded on analogue equipment and seemingly largely unedited. Although the lyrics sometimes don’t measure up to the emotion conveyed: “You can just close your eyes to it all, curl up and die to it all… what if that’s all there is? Wake up to what you missed”, she sings on It All. The pat post-rave sentiment seems somewhat atavistic: more fitting with the late ’90s than today.

Perhaps Rhodes is still shackled by the same success that blighted Lamb’s attempts to do things in more interesting ways. Her voice is so instantly redolent of a post party comedown that any downtempo song she sings will instantly transport anyone of a certain age to another time. And while nostalgia is not a bad emotion to evoke, Rhodes is well capable of inspiring far more. One Good Thing is a fine album, and individually the tracks are pleasingly reflective, but the instant familiarity and maudlin cosiness is more soporific than it is arresting.