Loudon Wainwright III – Haven’t Got the Blues (Yet) 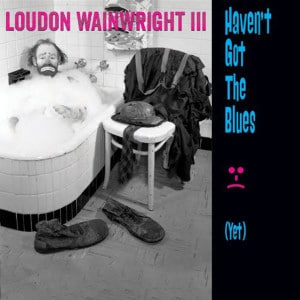 In the song Haven’t Got the Blues (Yet) from the album of the same name, renowned singer-songwriter Loudon Wainwright sings, “I’m just a leaky super tanker, I’ve got a lot of oil to spill.” It’s a reference to his tears, but in Wainwright’s case, it could also define his preferred method of expression.

Even when he first started, the critic’s often-given title of the “New Dylan” was already inaccurate. Wainwright more closely embodied the spirit of a Pete Seeger – humorous, a proverbial heart hanging off the sleeve, and more comfortable with the beauty of everyday, mundane living – than Bob Dylan, a man deep in persona, abstraction, french surrealism, and above all secrecy. However, Wainwright differs from Seeger in material and focus, from Seeger’s outward, political stance to a more inner-focused vision. Few artists have sung about their life’s edges as bluntly as Wainwright. On Haven’t Got the Blues (Yet), he confronts death, fame, remembrance, depression, and other heady topics with his trademark manner: humorous, verbose, opinionated, personal, and above all, completely honest.

The boogie-woogie of Brand New Dance flows lovely with the humorous lyrics about growing older and the ills of modern society. “Hey Hallelujah, it’s election time!” rhapsodies Wainwright doing his best Little Richard, “Voter booths form a big boss line,” before growing pessimistic, “but it’s the same old song, the same old dance, same long shot at the same slim chance – Yeah, one of them fools is bound to win…” Spaced has Wainwright enveloped in the vibes and rhythms of a French chanteuse and scat-singer, railing off humorous observations that sometimes read like brick wall stand-up zen koans: “A car in the city’s just a pain in the ass, that’s an albatross made out of steel and glass, it’s nice to know you can get out of town fast, but a car in the city’s a pain in the ass.”

In A Hurry presents a sympathetic portrait of the suburban middle-class Well Respected Man. The melody is gorgeous, though the imagery of the loner businessman, briefcase in tow, slogging through the train seems to be derived less from observation and more from post-1950s pop music tradition. The song, an interplay between the rejected of the world – the homeless – and his declaration to the more fortunate that he understands. It’s a very sweet song, but may contain a “grass is always greener” argument that doesn’t quite hold up. The destitute pity the well-off, but they’re still the destitute. One wonders if there can ever be a good American song where the mundane, boring 9-to-5 existence just exists as an option, not a symbol of immoral, bourgeoisie decadence nor a type of well-fed, comfortable hell.

A list of relief for the malady of melancholia makes Depression Blues stellar, asking if there’s so many escape doors, then where is the escape? The swimming hole is just a watery grave, sing Wainwright. Go to the Confession booth, the Wailing Wall, the serotonin injections or the dark Lord Satan himself, it’s all the same. Then these lines: “A comic can do an impression of someone who might seem like he don’t suffer from depression, Yeah get all that instant loving, you boy, be a clown and get ’em, you’ll have em right there in your sweaty palms before you annoy ’em.” Hearing this, in the wake of the recent tragedy surrounding Robin Williams’ death, gives one pause. The heartbreaking I Loved Your Mother, a sombre, uncomfortably honest song directed at one of Wainwright’s children, features the album’s strongest melody.

I’ll Be Killing You This Christmas is a slight left-leaning joke of a song with lyrics out of an old Mad Magazine parody, featuring potshots at Charlton Heston, the NRA, and the perceived absurdities in abuse of the second amendment. As a parody, it’s decent, with music so Bing Crosby corny, and Wainwright’s voice so dripping with sarcasm, that it more than makes up for expected targets (Really? Video games?). Harmless shows his folk side, the way he sings like a male Joan Baez.

Like all of Wainwright’s music, Haven’t Got the Blues (Yet) will divide opinion, depending on whether the listener enjoys his style; but whether the listener agrees with him or not, they cannot surely be unaffected by his rich outpouring of love, amusement, scorn, wit, and above all, spirit. In this way Haven’t Got the Blues (Yet) succeeds, as a very personal document of a very open man, and as a work of art.